The former island of Sète was developed as a colony and a port by the ancient Greeks. At that time it was an island in the Mediterranean Sea, just off-shore. Today it is located on the mainland, in the Hérault département at the end of the Canal du Midi – to which the town owes its development since the seventeenth century. At that time it was known as Cette – the name you will find on old maps. The spelling was changed to Sète in 1927.

The site is wonderful. Sète encircles a lone hill, the Mont St-Clair, on the otherwise flat Languedoc coast. And it is all-but an island. There’s the sea out front, of course. Behind, though, is the Thau lagoon – a vast expanse of salt water, colonised by oyster- and mussel-beds. Between the two, a network of canals brings the scramble of port and fishing activity right into the town centre. 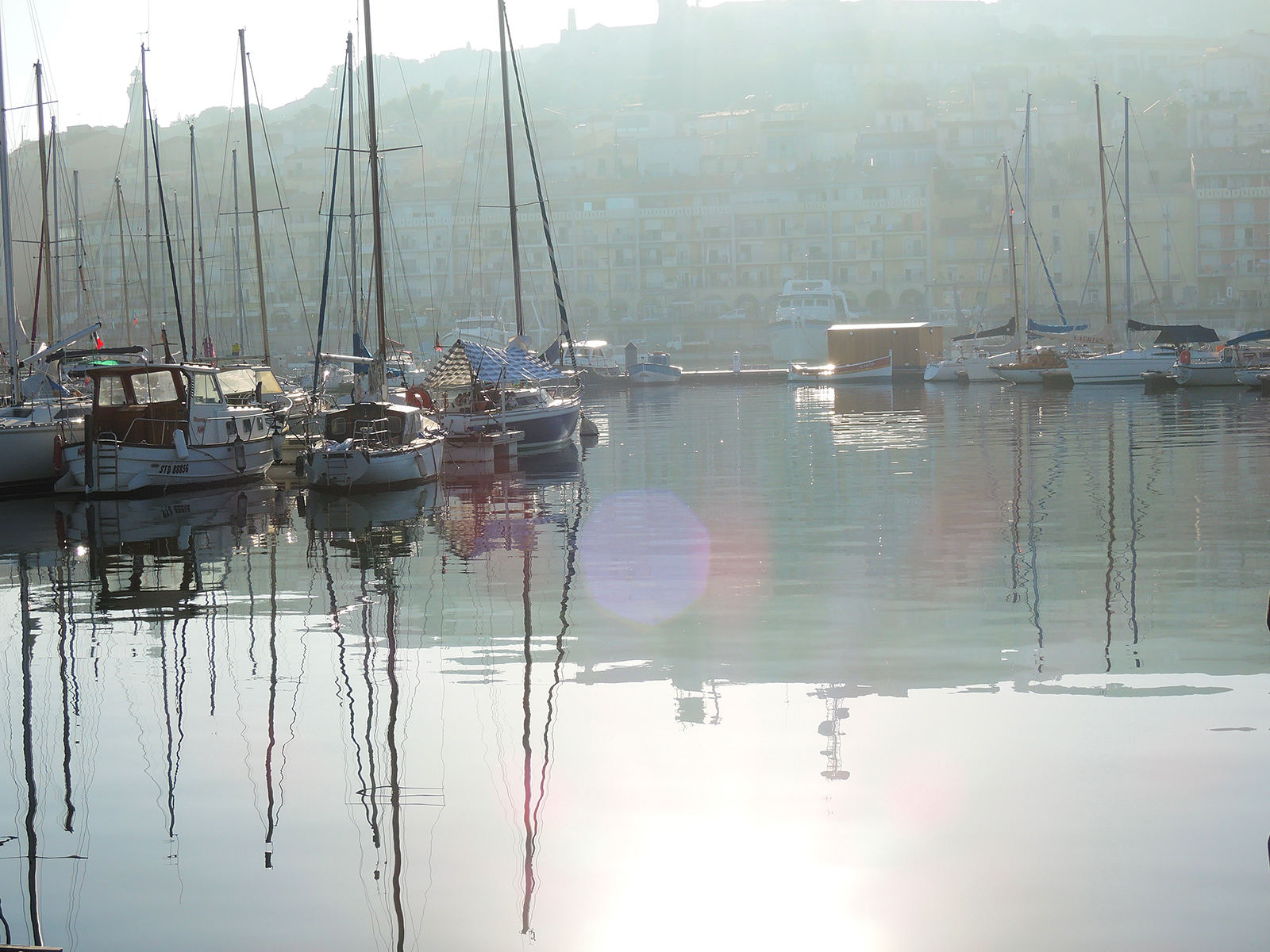 The port de plaisance on the Mole Saint Louis

Sète is a lovely fishing city which has much allure, from its beaches to its port lined with buildings painted rich ochres, rusts and azures. This is the spot to sample some of the world’s best seafood, usually prepared from the morning’s catches. Several canals wind their way through the city. The charm of Sète is in the effortless energy that exumes from the canal, the sea, the streets, the restaurants. You can walk and discover fishing boats, busy with their cargo, walk and find a restaurant to eat and watch, even in the relative cool of deepest winter. It seems there is a warmth here, perhaps because of its cosmopolitan feeling of ships from ports far away or from the young coming from the neary university city of Montpellier. It is no wonder that Georges Brassens, who is buried here, was imbued with song and word, and also that it was to provide the inspiration for Paul Valèry.
Perhaps take a bite in one of the wonderful restaurants on the canal (ours is Les Demoiselles Dupuy, not to far from the fish hall) before climbing up Mont Saint-Clair (183m), where you will have a wonderful view of the village, the port, the Bassin de Thau, the Cevennes, the Pyrennees.
In the restaurants a local specialty found on many menus, is bouillabaisse. This popular and hearty stew combining fish and shellfish actually got its start as a low-cost lunch for hard-working fishers by mixing together whichever of the day’s catches didn’t sell at market. Other Sètois fish specialties include “le tielle,” a fish and tomato tort, and “la rouille de seiche,” a mix of fish, tomato sauce and aioli. 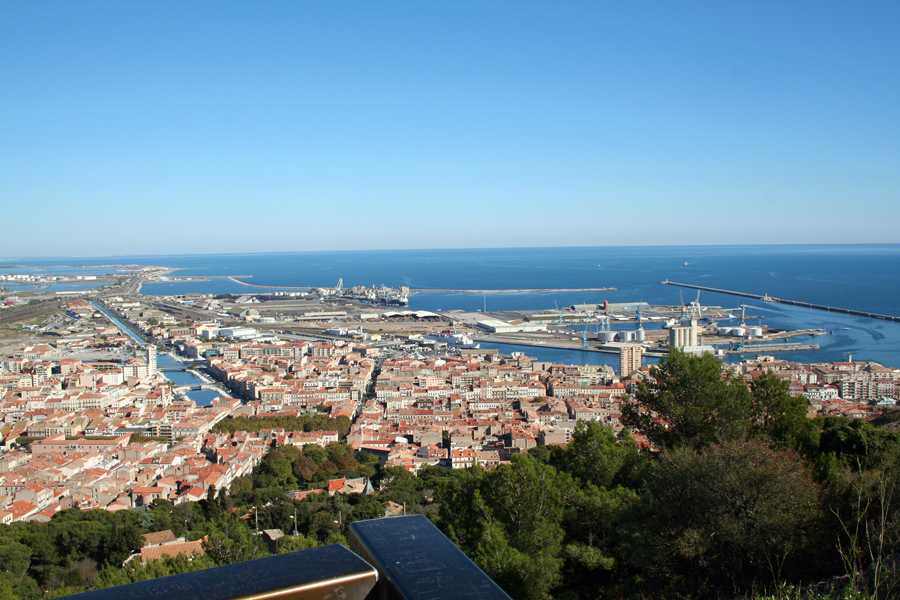 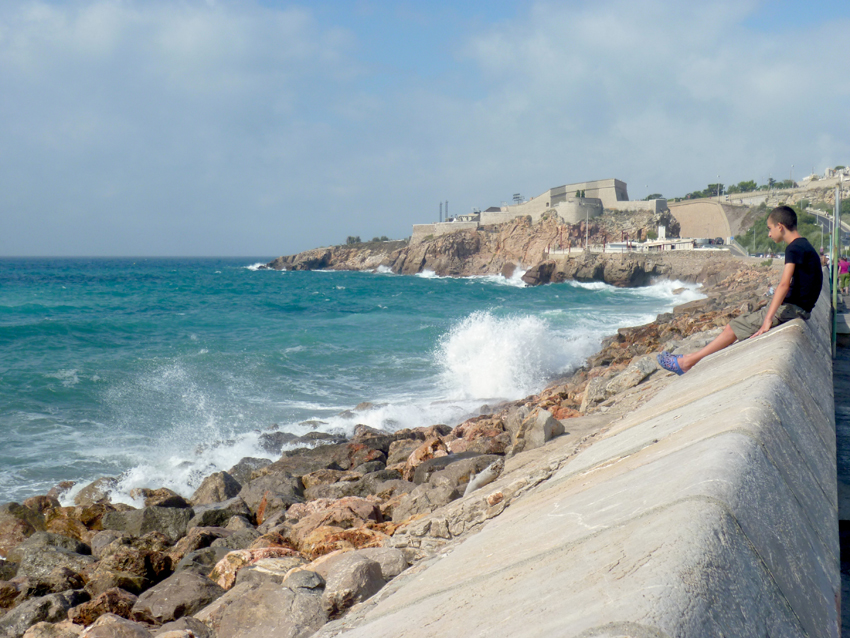 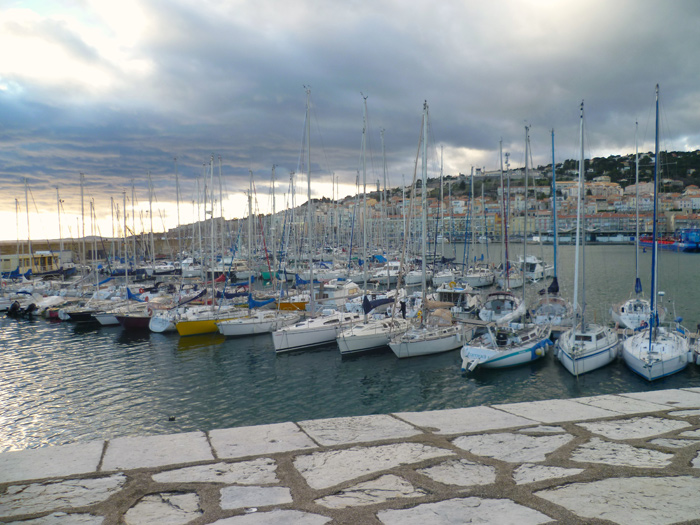 Things to see in Sete:
It may be a relief to learn that Sète contains no absolutely essential monuments or vital museums. The attraction is the town itself: watery, energetic, a bit run-down in parts but colourful as hell. The first task, then, is to discover the centre and its criss-cross of canals.

This network is effectively Sète’s raison-d’être. On the orders of Louis XIV, the port (and town) were built from 1666 to provide an outlet to the sea for the Canal du Midi. Start on the Canal Royal, which bisects the centre, connecting the sea to the Thau lagoon. You’ll note a mix of grand frontages and newer stuff overlooking the water. The Pont-de-la-Civette (Civette Bridge) marks the start of the Quai-de-la-Résistance and the main stretch of canal-side bars and restaurants.

Continue along the quays, noting the fishing boats and fish auction house (la criée) where unloading trawlers will be under attack from gangs of gulls. Round the corner is the commercial port and, ahead of you, the 650-metre St-Louis Jetty (Môle St-Louis). Now you may double-back to the centre along the lively, tight-packed streets behind the quays. 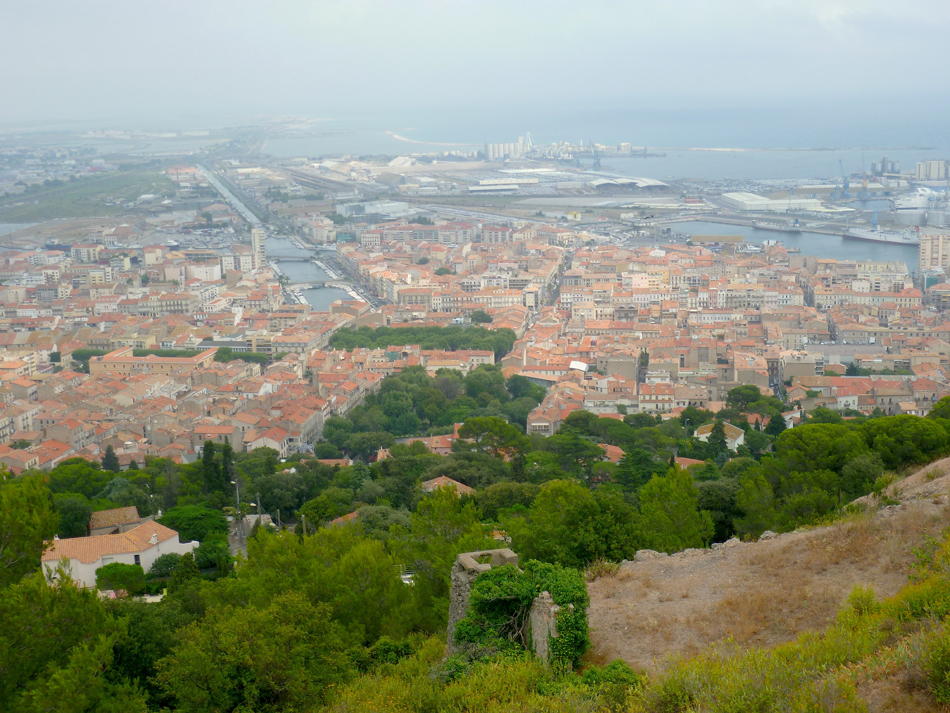 Today Sete is an active port with freight and a passenger service to Tangier. Lying between the Etang de Thau and the sea, it is France’s most important fishing port as well as a lively holiday resort with almost 8 miles of sandy beaches. 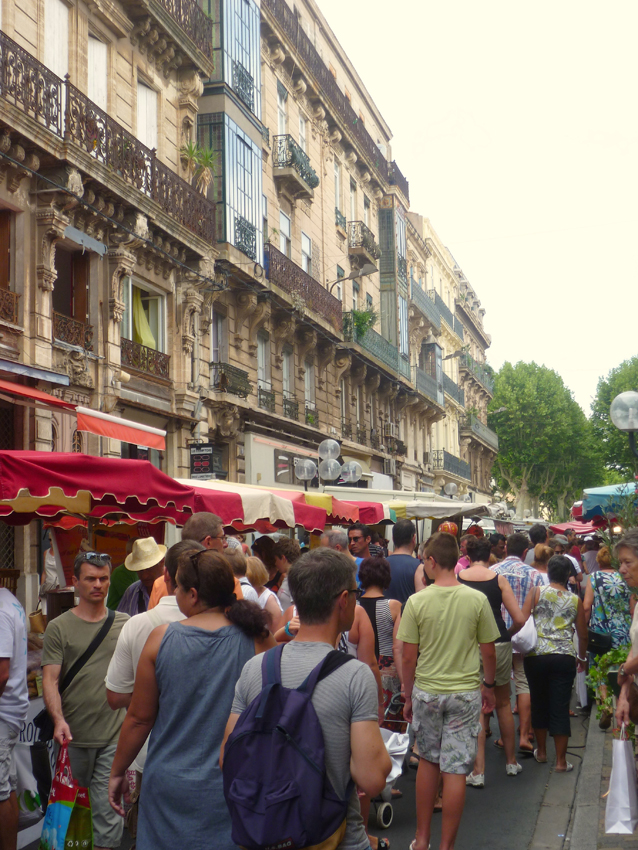 the weekly market in Sete, Wednesday morning attracts many people 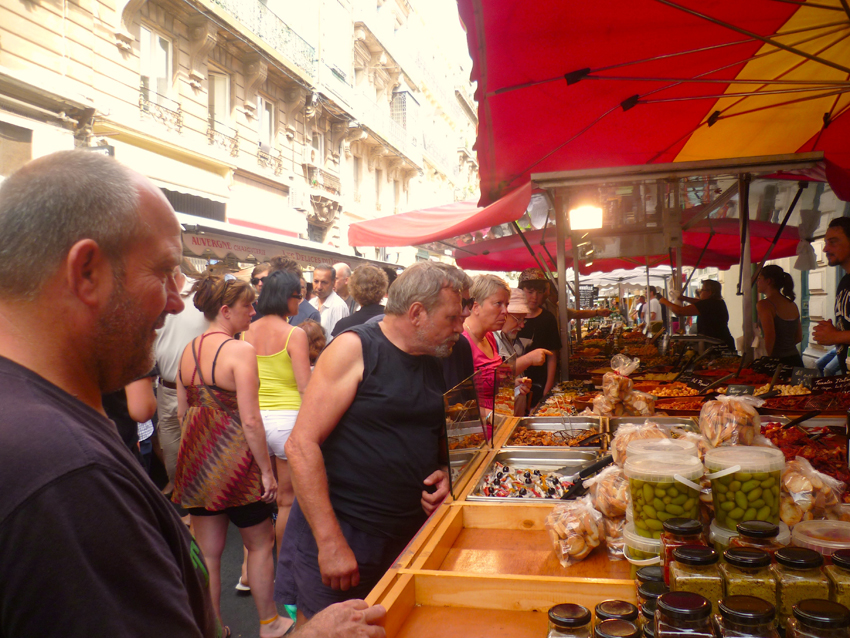 The covered market place Sete;
75 Merchants welcome you in the heart of town
Every morning from 6:00 a.m. to 1:00 p.m., the central market, Boulevard Gambetta, offer all the local produces and seafood. It is possible to eat there, prices around 10 euro p.p.
Other markets in Sete
Monday morning:
Island of Thau, Street Marius Bonneton.  food, flowers and textiles.
Wednesday morning:
the main market of Sète is held on several streets and places of the center town: the place Aristide Briand is reserved for the “textile-bazaar”, the streets of Alsace-Lorraine and Gambetta for the food market and the Place Léon Blum  is reserved for the flower market.
Thursday morning:
country market, products of the Soil, place Edouard Herriot – La Corniche
Friday morning:
food and textile market: place Stalingrad and Avenue Victor Hugo.
Sunday:
Small food market, rue des goélands, quartier du Barrou.
Artisanal market: Place A. Briand
The artisanal market is held all the second saturday of the month, all year, in center town. 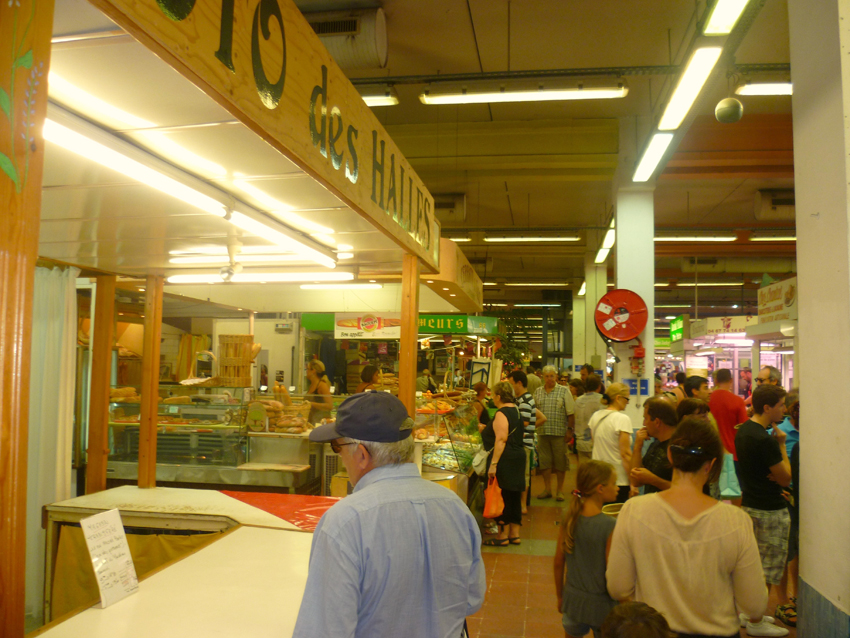 The interior of the covered market in Sete

Restaurants
Fish, shell-fish, then more fish – and all with an Italian influence: that’s Sète’s food in a cockle-shell. Canal-side restaurants crowd the quays along, especially, the main Canal Royal. Take a table on any of the terraces and you have a ringside seat for the full spectacle of Sète life. So you can enter pretty much any of the spots along the Quai de la Résistance, Quai Général Durand or Quai Maximin Liccardi with confidence.
One of our favorites at the Quai is:
La Marine, (29 Quai General Durand, 00 33 467 743003) 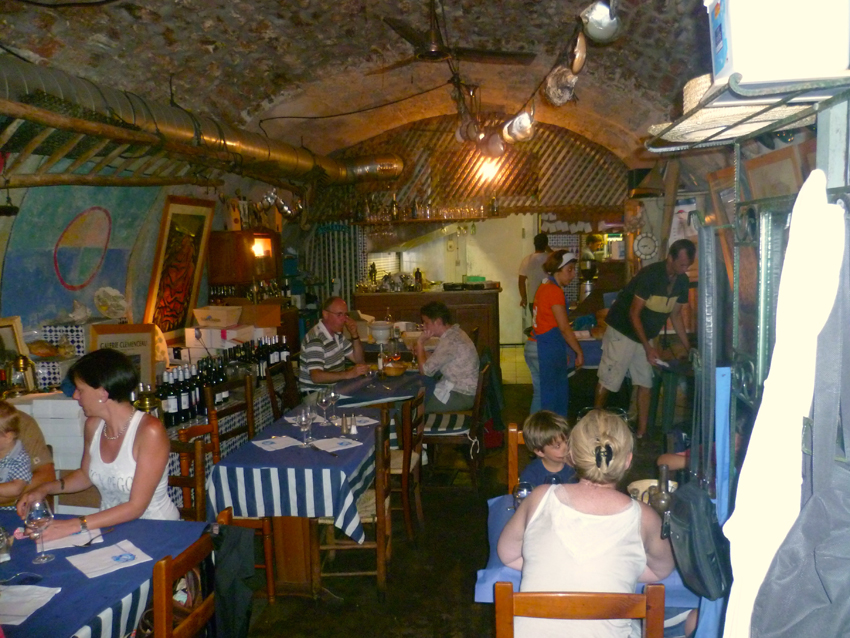 les demoiselles Dupuy, interior
Paris-Mediterranée (47 Rue Sémard, 34200 Sète. 0033 467749773), down a titchy street, is another of our favorites, some way from the crowds and the quays, is a contemporary Parisian bistro transferred to the seaside and charged with modernising local eating habits.
Round the rocky Cornice, on the new pedestrian promenade edging the beaches,
Thierry Alix has worked in gastronomic restaurants all his life has now put his own name to a shore-side spot (621 Promenade du Lido, 34200 Sète. 0033 467741091). It’s not your typical beach eatery at all, but rather a haven from which you may contemplate the Mediterranean in elegant contemporary comfort and enjoy inventive versions of Med cuisine.
The Marcel (0033 467 742089) is an oddly named but fabulous restaurant on rue Lazare Carnot, where lunch will set you back an average €20 per person in an art deco-inspired setting that’s perfect for a romantic dejeuner à deux (it’s on a street just off the rive gauche of the main canal, as you look out to sea).
Another option is Au Bord Du Canal (9, quai Maximin Licciardi, tel. 0033 467 519839). Step inside and the décor is reassuringly smart and clean (ditto the toilets – always a good sign), while the seafood is stunning – and practically straight off the boat.
Au Feu du Bois, a restaurant near the central Market with good food, fresh form the grill. Adress: 8 Bis Rue Frédéric Mistral, 34200 Sète. Telephone:+33 4 67 74 77 56Finally at the Canal towards the Bassin de Thau at the Pointe Courte there is Restaurant Le Passage,
1 quai Mistral, 34200 Sète, Tel 09 80 31 30 21 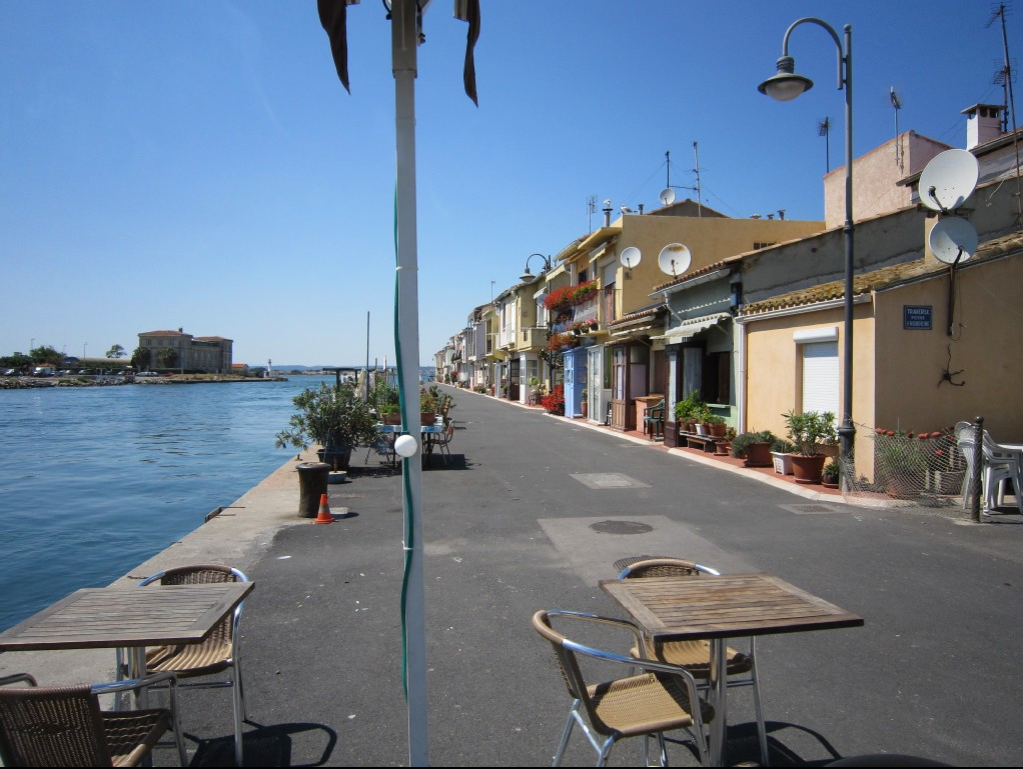 The Pointe Courte district is situated just between port and the Thau Pond, which product the wellknown bouzigues oysters…delect yourselves !

ART
Further down from The Marcel, at 26 quai Aspirant Herbert, there’s the:
CRAC (Centre Régional d’Art Contemporain), a regionally-funded centre that showcases contemporary art in all its forms. You’ll be able to spot it easily – the modern building pops out from its early 20th century surroundings – and it’s always good for a headful of thought-provoking stuff. Call 0033 467 74 94 37 for opening hours or visit http://crac.lr.free.fr/
Then there’s the MIAM (Musée International des Arts Modestes), at 23, quai Maréchal de Lattre de Tassigny, where some very left-field exhibitions celebrate the weird and wonderful world of knick-knacks, souvenirs and everyday objects (see the website at www.miam.org for a better idea of what it’s all about) that is a real kid-pleaser. 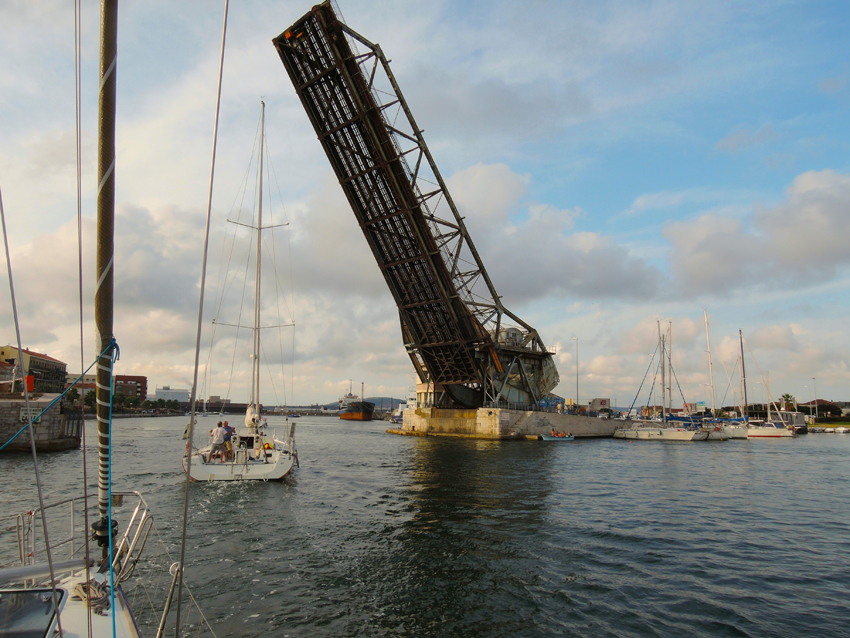 Passing through the bridges of the Canal Lateral you can get out on the other side to the Bassin de Thau. Just after the second bridge is the harbour Bassin de Midi, where the Esprit de Co(r)ps is situated 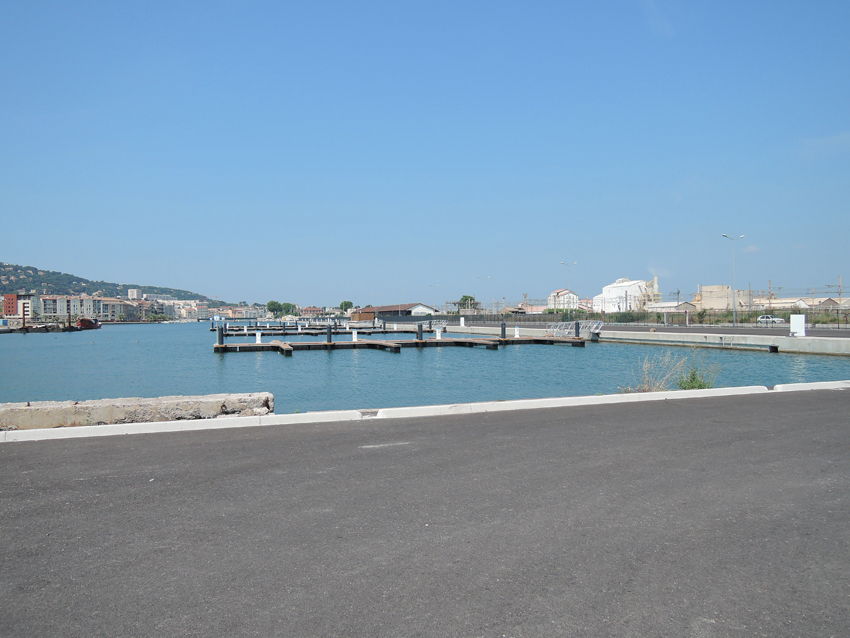 An overview of the Bassin du Midi, here still under construction (summer 2013)

Canal de Sete, looking towards Pointe Courte (They du Roustan), a lovely area in Sete with at the corner a nice restaurant (open in summer time all day, in winter they only serve lunch) 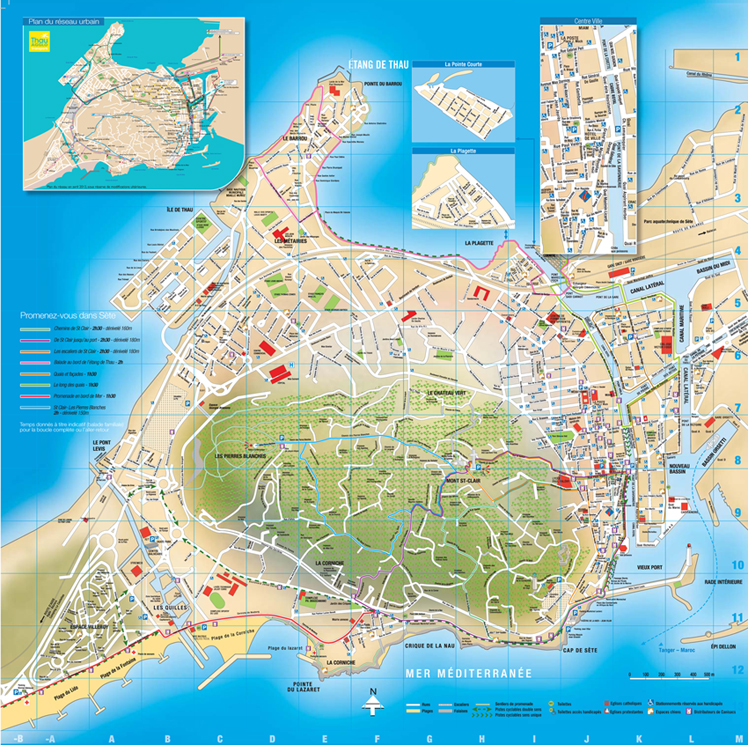