Cadaqués is situated in a bay in the middle of the Cap de Creus peninsula, near Cabo de Creus, on the Costa Brava. As it is situated so close to the Cabo de Creus, weather is something to really keep an eye on when sailing in these waters.
The wind can be very strong here, and most bays are quite open to the sea. 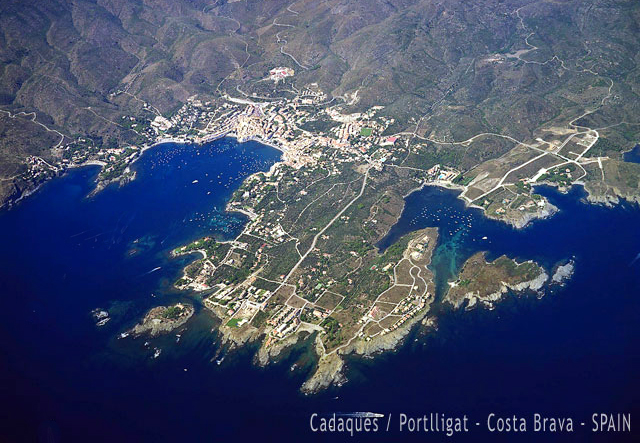 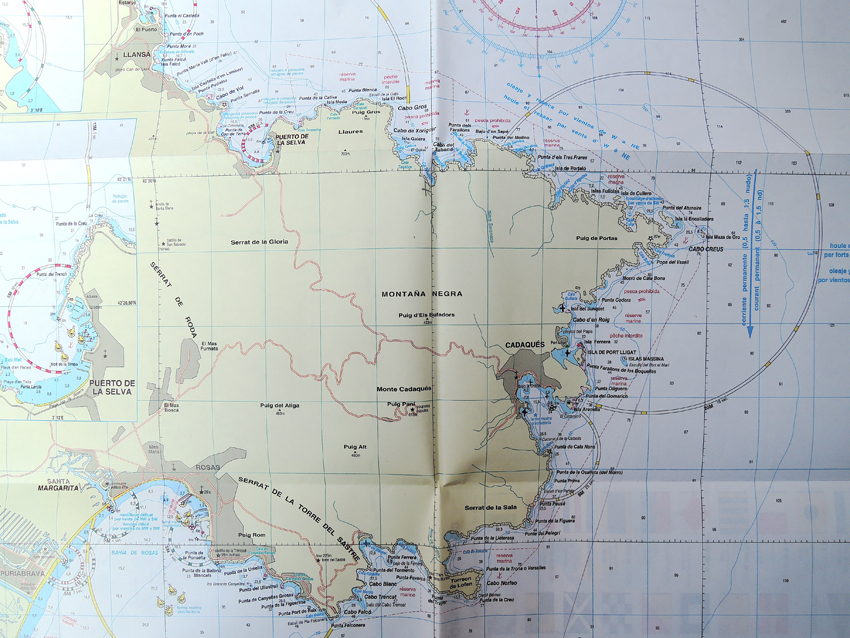 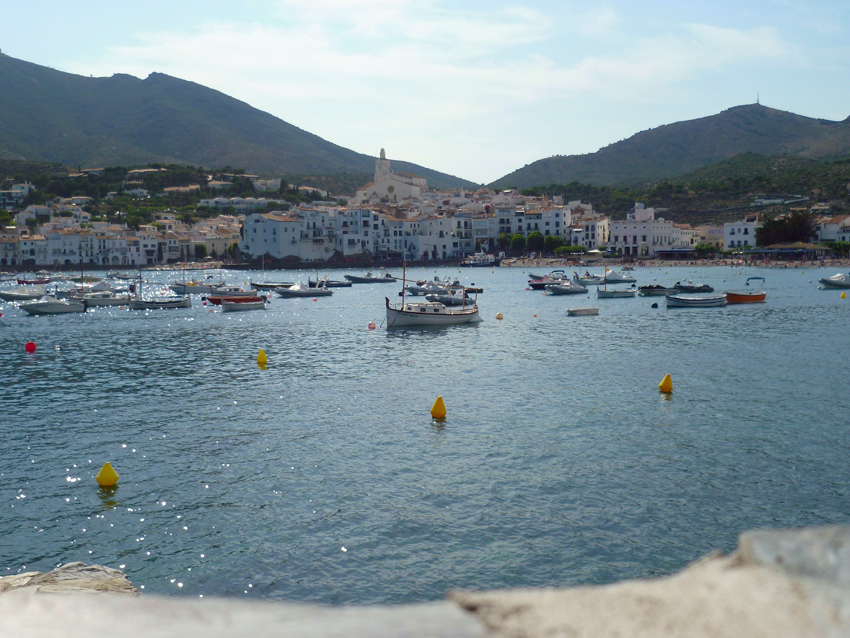 Cadaqués and the surrounding peninsula known as the Cap de Creus owes its beauty in part to its complex geology. The rocks here were mashed up when the Pyrenees (or Pirineus in Catalan) were formed, and are mostly metamorphic schists which turn a golden colour in the Mediterranean sun. 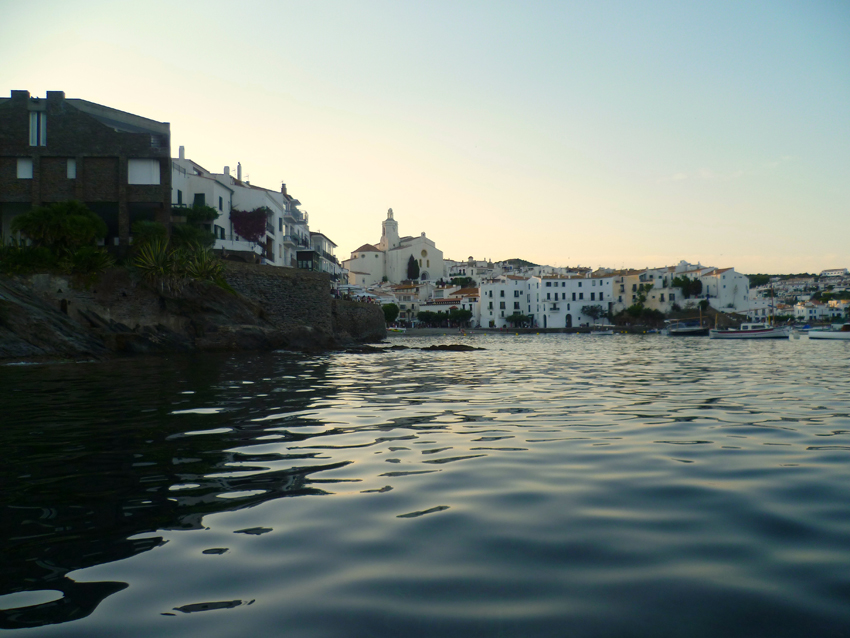 Add to that the weather: this is one of the wildest spots on the Costa Brava in the winter (Costa Brava means “wild coast”), so the migmatites and schists are battered and eroded by the Tramuntana wind which whips off the mountains and by a sea that appears as if it is boiling in the force 8 winds.
Fortunatly Cadaqués is situated on the South side of the mountains, and the dominant wind is the North Mistral or Tramontane, but still, it blows here! 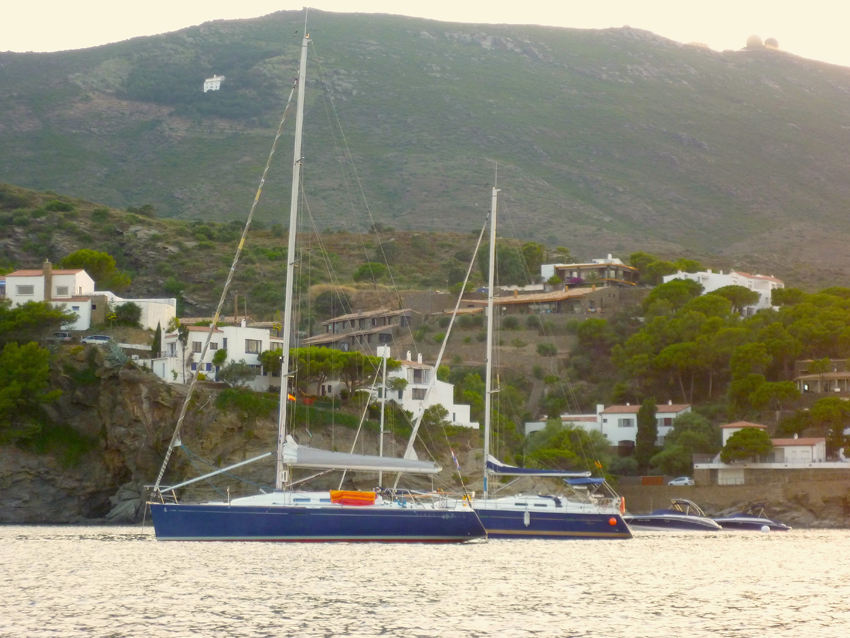 The Cadaqués migmatites formed under extreme pressure and temperatures: a partial melt. They are halfway between an igneous and metamorphic rock. The area also contains a lot of schist: a medium grade metamorphic rock that has been flattened into sheets. White blocks of pegmatite mark where molten rock was squeezed through the older metamorphics at the end of the orogeny or mountain building.

The Cap de Creus is a great place to study Structural Geology. The geological history has been exposed by erosion from wind and sea, and many geologists have mapped the area for this reason.

The interesting submarine life of this sleepy fishing village was studied for several years by phycologist Françoise Ardré, long before Cadaqués was discovered and transformed into a tourism destination. On Mondays there is a travelling market in Cadaqués, located near the parking lot. This market has a wide variety of products.

The Cap de Creus (00 34 972 199005, no booking), by the lighthouse, feels like the restaurant at the end of the world, with tables on the cliff edge and outstanding views – perfect for a cold beer, as well as great traditional fish dishes, and, surprisingly, an Indian menu too.
Back in Cadaqués, grab a strategic table on the terrace of the Café Marítím (Passeig Marítim), and order some tapas, or try the fish soup at Casa Anita (Carrer Miquel Rosset 16, 00 34 972 258471, www.casa-anita.com)

The village of Cadaqués has its own variant or dialect of the Catalan language. One of the most notable features is that the definite articles are different from standard Catalan, namely, they are “sa” (feminine) and “es” masculine instead of the normal Catalan definite articles “la” and “el”. This feature is shared with the variant of Catalan spoken in the Balearic Islands. The explanation for this (see “El Vocabulari de Cadaqués”, Ernesta Sala i Bruses) is that when the Catalan ruler Jaume I conquered the Balearic Islands in the Middle Ages he re-colonized the islands with people from the Empordà region of Catalonia. Because Cadaqués has remained relatively isolated from the surrounding region (owing to its geography), the mediaeval speech patterns have been preserved.

Cadaqués has a special place in art history. Commanding charcoals, by local artist Meifrén, of the 19th century Cadaqués beleaguered by a winter tramontane, can be seen at the Cadaqués museum. MeiFren was the first modern artist to live in Cadaqués and gave the town many of his works and a marble top table on which he sketched many of its turn-of-the-century fishermen. 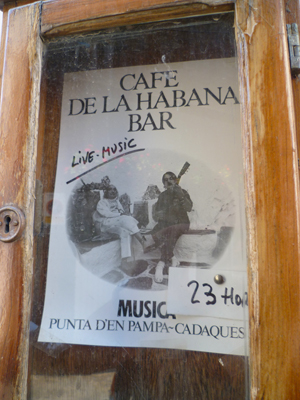 Salvador Dalí often visited Cadaqués in his childhood, and later kept a home in Port Lligat, a small village on a bay next to the town. A summer holiday here in 1916, spent with the family of Ramon Pichot is seen as especially important to Dalí’s artistic career. Other notable artists, including Pablo Picasso, Joan Miró, Marcel Duchamp, Richard Hamilton, Albert Ràfols-Casamada, Antoni Pitxot, Henri-François Rey, Melina Mercouri and Maurice Boitel also spent time here. Cadaqués is mentioned in the story “Tramontana” by Gabriel García Márquez.

Also architecture of Cadaqués is interesting and has its own origins from the past
In the early 20th centurya large number of inhabitants of Cadaqués travelled or emigrated to Cuba (the figure has been estimated as one third of a village of approximately 1200 people). Many of these immigrants were financially successful in Cuba and returned to Cadaqués where they constructed large and ornate houses. These houses can still be seen in the town (for example; the “Casa Blava”, “Blue House” in English). A person returned from Cuba was referred to as an “Americano” among other names.

Around the corner from Cadaqués is Port Lligat, Dali´s home, and these days, a fascinating homage to the man and Gala: his lifelong love. Make sure you wander around the bay from Cadaqués to Port Lligat during your stay. 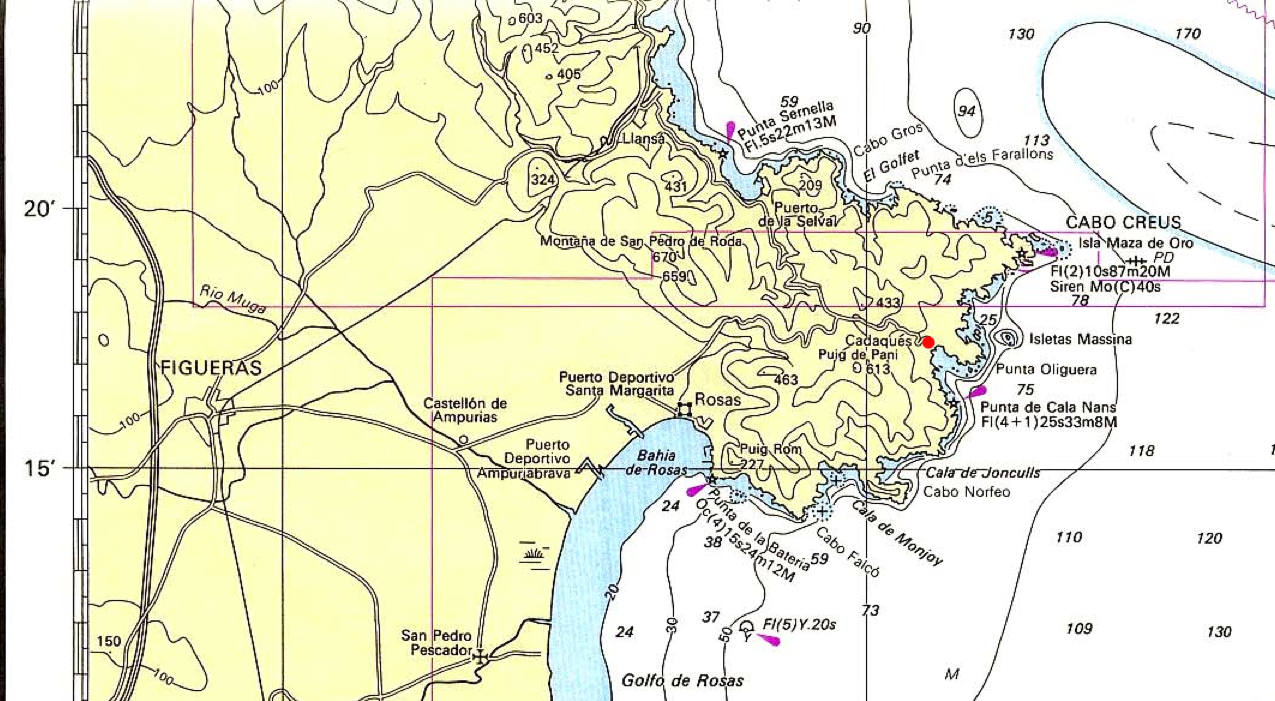