Porquerolles is the biggest of the three islands of Or in the Hyeres gulf.

Seven km long and 3km wide, Porquerolles is the most popular, with the largest population.

Porquerolles has a small town and the island is great to go walking, visit the small town, rent a bike and discover the island or to just visit some of the splendid beaches they have, christal clear water, sand beaches, a dream……. 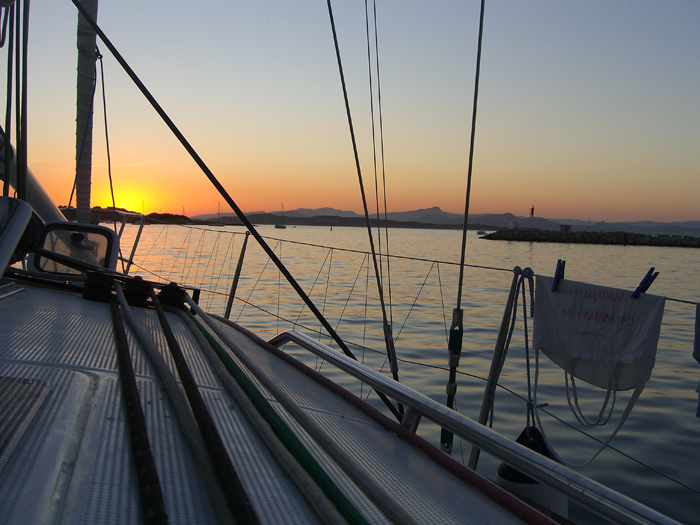 It is situated at the same latitude as Cap Corse, and therefore shares the same pleasant climate – almost daily sunshine (more than 300 sunny days a year), mild winters (rarely below 0°C) and hot summers with a delightfully cool seabreeze. 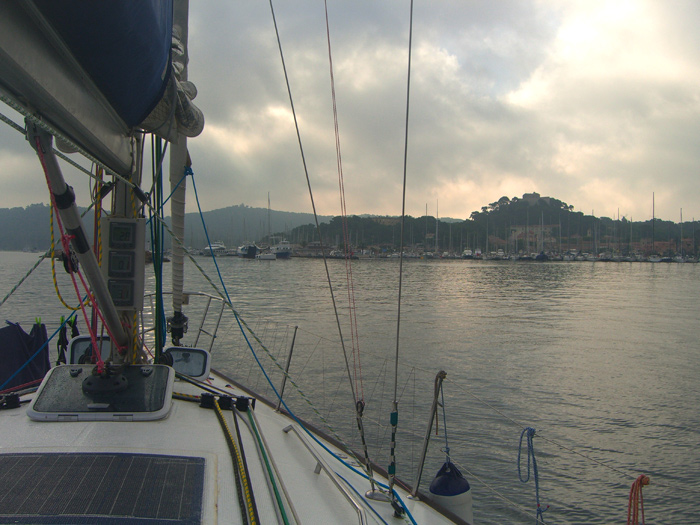 Porquerolles, anchoring, looking at the Harbour entrance and town

The village was first built in 1820, the lighthouse in 1837 and the church in 1850. After being owned by a succession of people, the island was bought in 1912 by Monsieur Fournier who apparently bought it as a wedding present for his wife.

As soon as you arrive at the port, you will be captivated by the island: behind the boats tied up to the quay, the first houses can be seen, surrounded by lush vegetation. 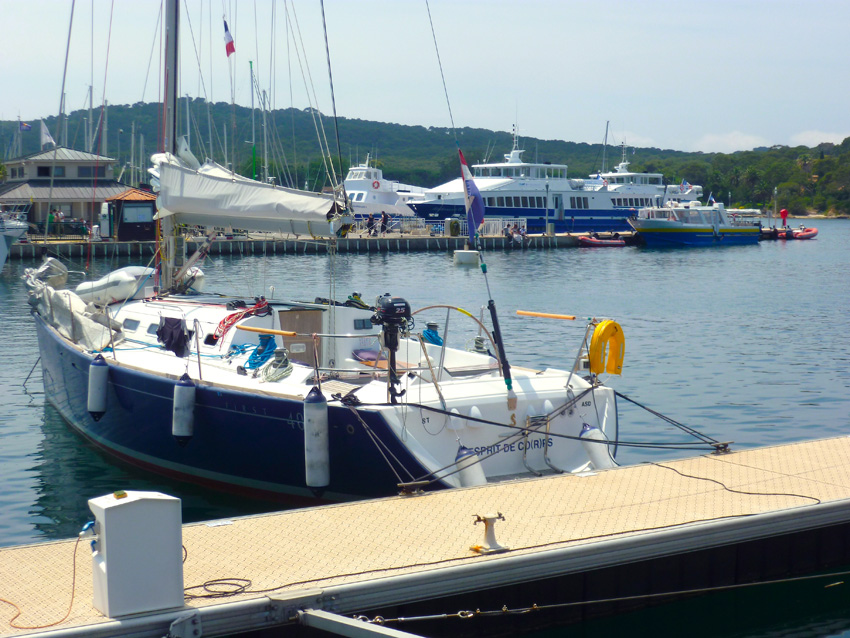 In the interior, there is a mosaic of vineyards, olive trees and fruit trees of all variety… lemons, oranges and mandarins.

Two hundred hectares of grapevines were planted and the vineyard later produced a top quality wine which was one of the first to be classed “vins des Côtes de Provence”.
Today the three vinyards on the island produce wine which has an excellent reputation.
The vineyards are associated with the Conservatoire Botanique National de Porquerolles which protects the island’s heritage and environment. 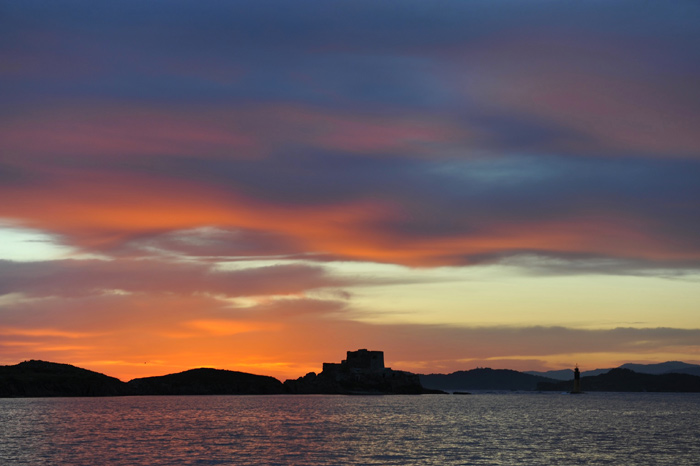 The last minutes before sunset in Baye du Langoustier

In 1971, the state bought 4/5 of the island, thus protecting it from any unsightly housing or hotel developments… the style and architecture of the existing houses blend harmoniously with the natural beauty of the site. Classified “heart of National Park” since 2012, Porquerolles is a site where the land is protected, cultivated, replanted and studied, thanks to the Conservatoire Botanique and to the Parc national de Port Cros. Their plantations are difficult to miss. 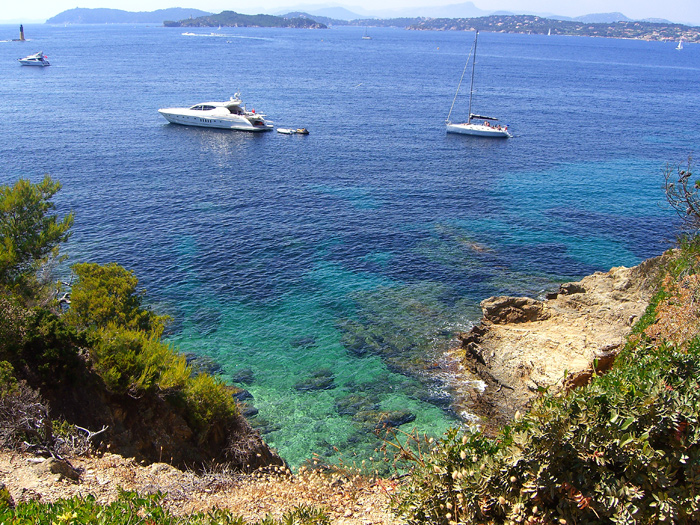 Porquerolles, Baye du Langoustier seen from the island.
In the back Ile du Grand Ribaud , 51m high, lies 0.7 mile SW of Pointe de la Tour Fondue. Its summit is surmounted by a prominent chateau. A light is shown from a structure, 14m high, standing on the S extremity of the island.
An islet, 18m high, lies midway between the island and the mainland coast. A rock, 6m high, lies close N of this islet.

Porquerolles, Baye d’Alicastre (North-East side of the Island) 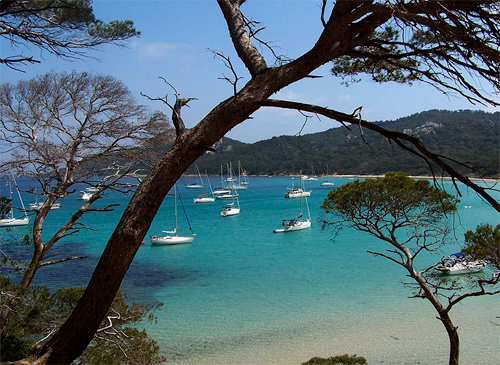 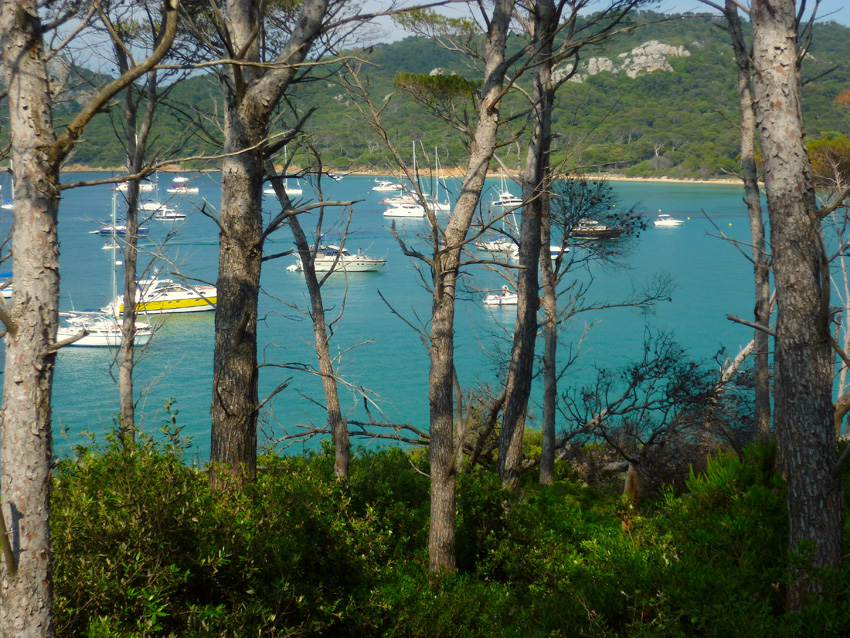 If you decide to go for a bike ride, the paths are

bordered by pines, eucalyptus and numerous plantations, courtesy of the Conservatoire Botanique. Most of the paths are shaded, sheltering visitors from the “coups de chaud”.

In spring the flowering scrub, with its myrtles and heather, transfoms the island into a huge fragrant bouquet of flowers. In autumn, the pine forest’s different shades of green mix with the white flowers and red fruit of the strawberry trees.
In summer the cicadas sing to their hearts content… reminding you that you are in Provence and not in a tropical island at the other end of the earth… 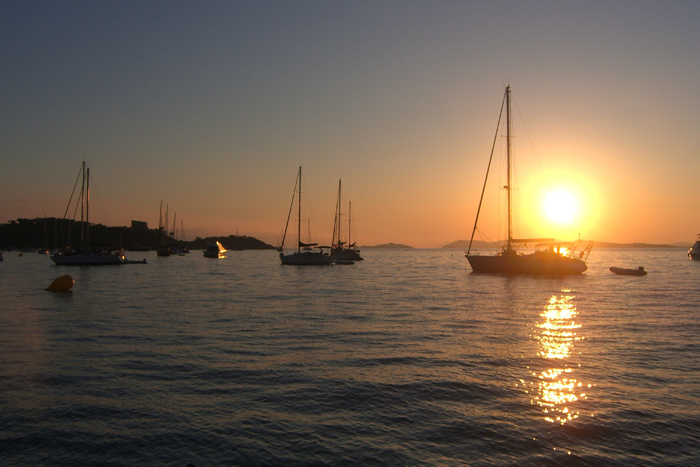 Porquerolles, anchoring at the Baye d’Alicastre

Routes east or west along this coast are straightforward with marinas dotted at short intervals all along the coast. There are a few good anchorages but not many. Like Provence the mistral can blow all along this coast and can be channelled between the high land with some violence. These gusts are particularly bad out of Toulon, Rade d’Hyeres and off the Maures Massif. In the summer the mistral is less frequent and strong and the prevailing wind is the marin, the sea breeze blowing from the SE. In high season it can be quite strong and may reach Force 5-6 in the afternoon, so anchorages which were tenable in the morning when winds are lighter may be untenable in the late afternoon.

This coast has few well known names like St Tropez, Cannes or Antibes along the Cote d’Azur to the east, yet it has its own lesser known gems like Sanary, Iles dez Embiez and Le Lavandou and a few of these should be included in any cruise along this coast.

Port Cros
Port Cros is located between Porquerolles and Levant island. It’s the smallest of the three islands which make up the “îles d’Or” in the golf of Hyères. 4 km long and 3 km wide the island extends to 690 hectares.
The island has five forts which bear witness to it’s past as defences for Port Cros. The oldest fort dates from François I° reign (Fort du Moulin). Only two of the forts are open to the public : the Fort de l’Eminence (30 mn by foot from the port) and the Fort de l’Estissac (15 mn by foot from the port). The latter is an ideal vantage point to view the island.

The Island of Port-Cros is a natural marine reserve. Although there is a small port with two B&Bs, some restaurants, bars and a small grocery store, the rest of the island is an uninhabited park. There are walking paths which lead to various desolate beaches where you can snorkel amongst the kind of fish that are rarely ever given the opportunity to grow so large.
While several paths leading to the beaches are always open, the internal park is closed during the hot, dry, summer months, due to the high risk of forest fires.

Port Cros is the hilliest and wildest of the three islands, and you’ll appreciate the absolute calm and quiet of the island. Just like Robinson Crusoe’s island, as long as you avoid July and August. You can’t fail to fall under the charm of the port… a small and tranquil port shaded by it’s palm trees you’ll think that you have arrived on a tropical island where the relaxing atmosphere reminds you that you are here, “in the south of the South of France”.. 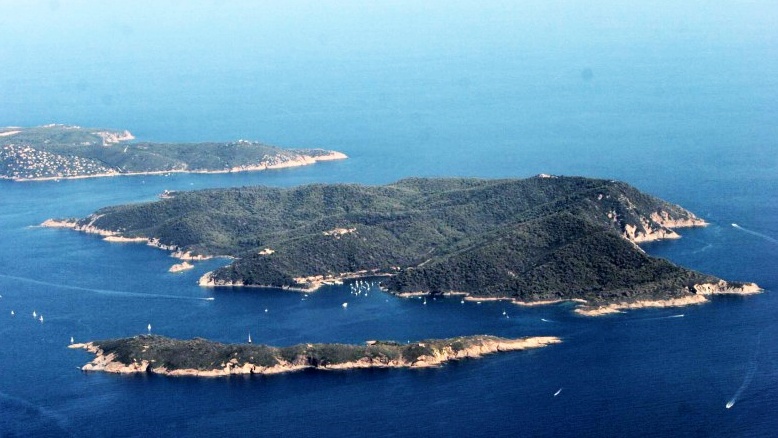 True nature lovers will be amazed at the range of rare and wild protected species which you can discover on the island thanks to more than 35 km of signed paths and trails around the whole of the island. Be amazed by the botanical trail or discover the landscapes of Port Cros along the ridges (3h), the tour around Port Man (4h) or the beach (30mn). 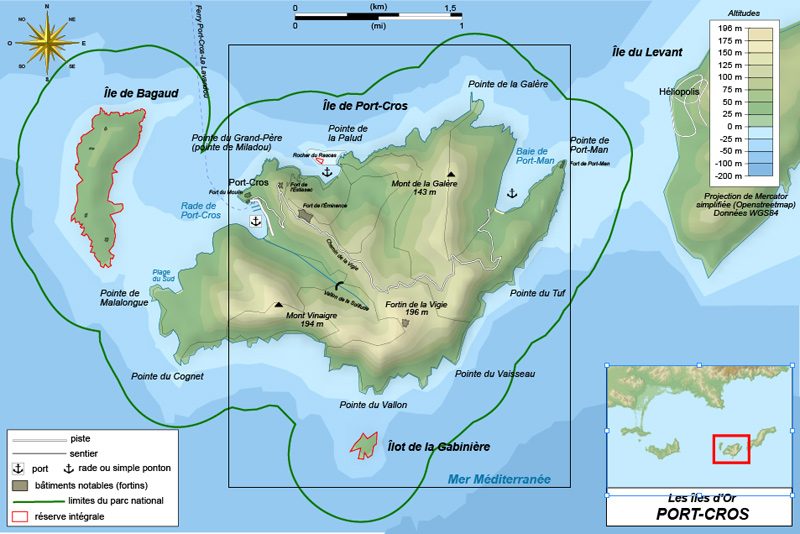 Ile de Bagaud  lies 5 miles E of the E extremity of Ile de Porquerolles. This island is 59m high, rocky, and is topped with thick trees.
Ile de Bagaud and Ile de Port Cros form a national park. Navigation, anchoring, and fishing are prohibited within 600m of the coastlines. Landing on Ile de Bagaud is prohibited. 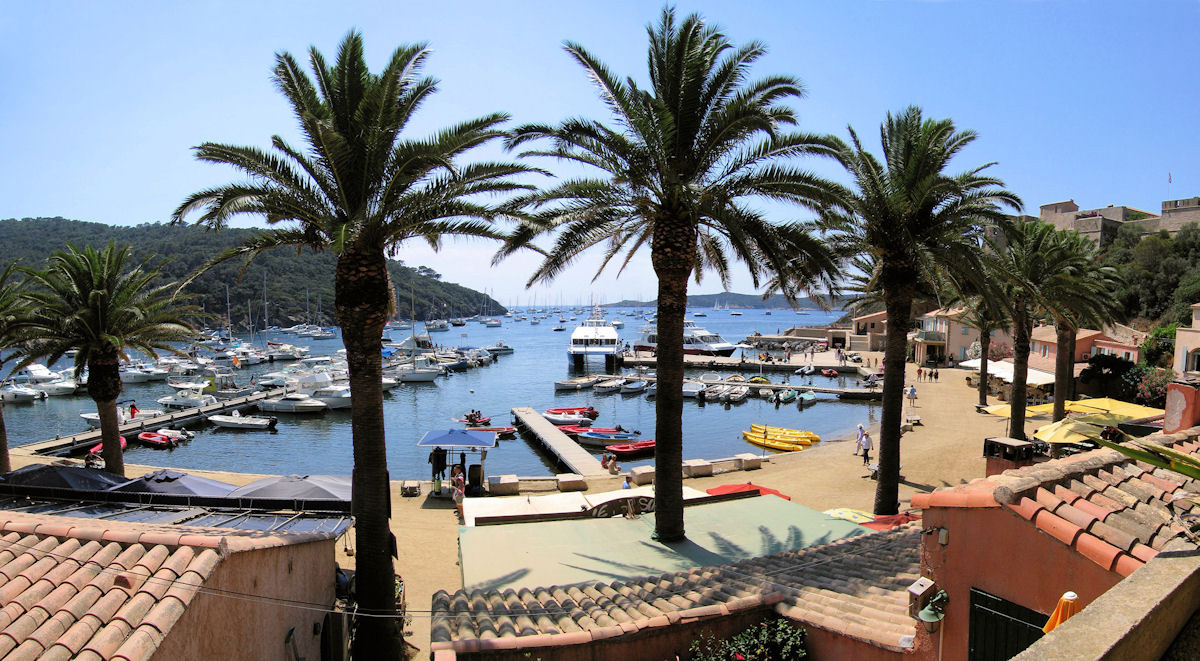 The ‘Harbour’ of Port Cros,  attach yourself to one of the mooring buoys

You can’t fail to fall under the charm of the port… a small and tranquil port shaded by it’s palm trees you’ll think that you have arrived on a tropical island where the relaxing atmosphere reminds you that you are here, “in the south of the South of France”.

Opposite the landing point you’ll find the reception of the Port-Cros national park where you can buy a map of the island and pick up documentation about the nature trails. 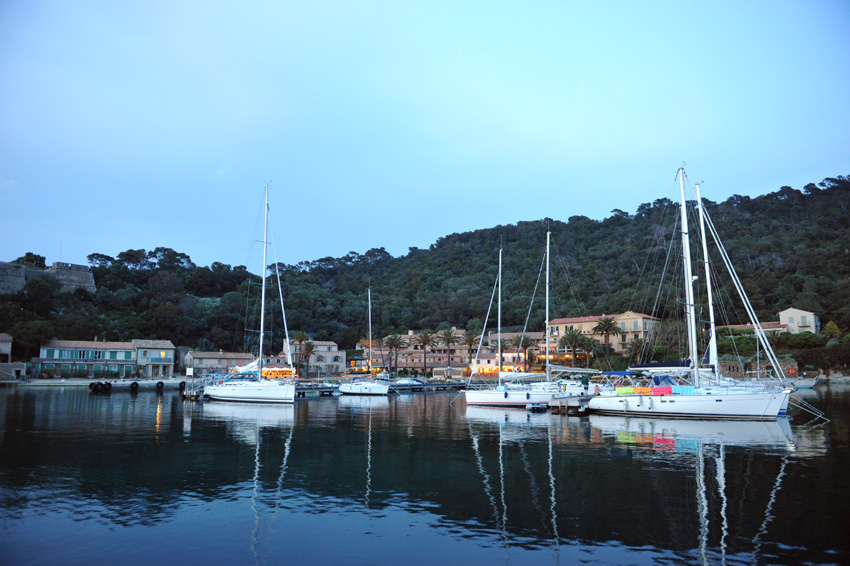 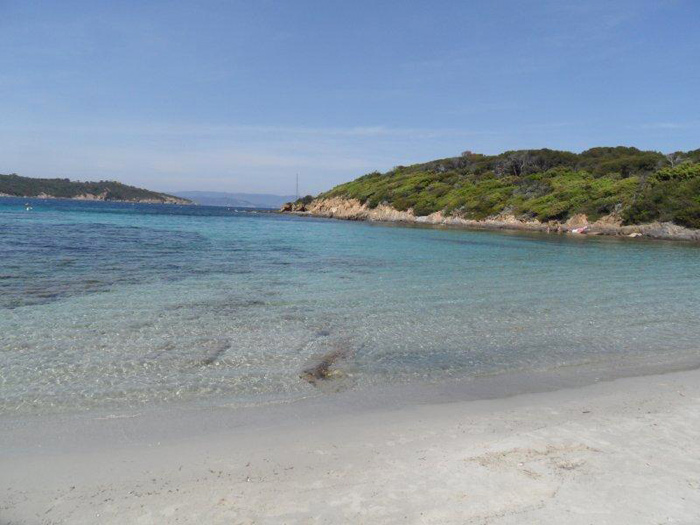 The underwater tour starts from the La Palud beach. (bring your mask, snorkel and fins).Leaving the port, behind the fort take a fantastic path which offers sea views which will make your skin tingle with wonder. The beautiful odours from the mediterranean fauna are everywhere, the shady walk takes around 30mn, or 30 minutes of beauty. Then you’ll arrive at the sandy beach , not too small or too large with a few tress which offer welcoming shade… Opposite, and at your feet you’ll see the sea, shimmering with no boats to obscure the fantastic view because boats are not allowed to moor in the beach in order to protect the underwater species… This is the closest to paradise you’ll find.. 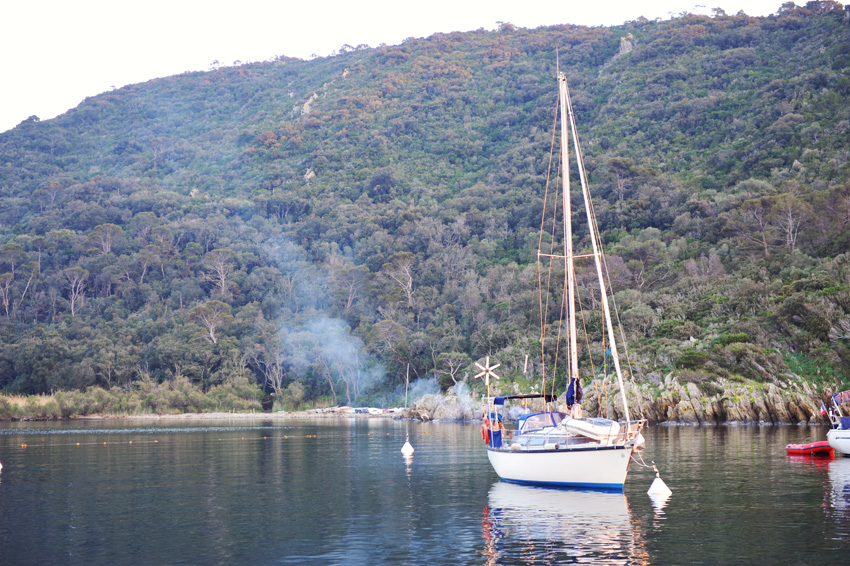 dinner is being prepared…the (famous) french BBQ, everybody has one on board… 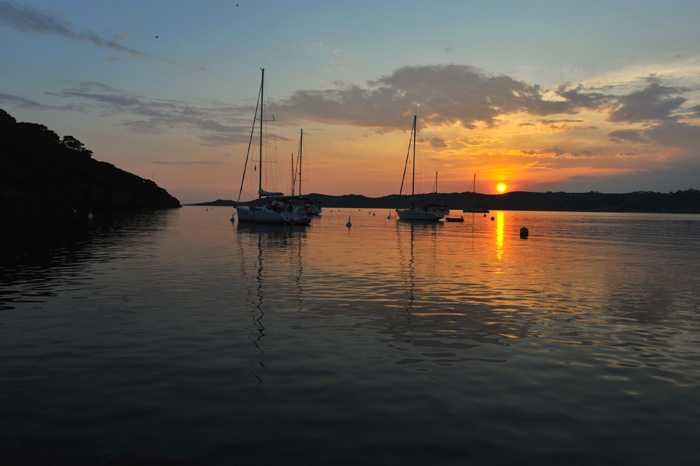 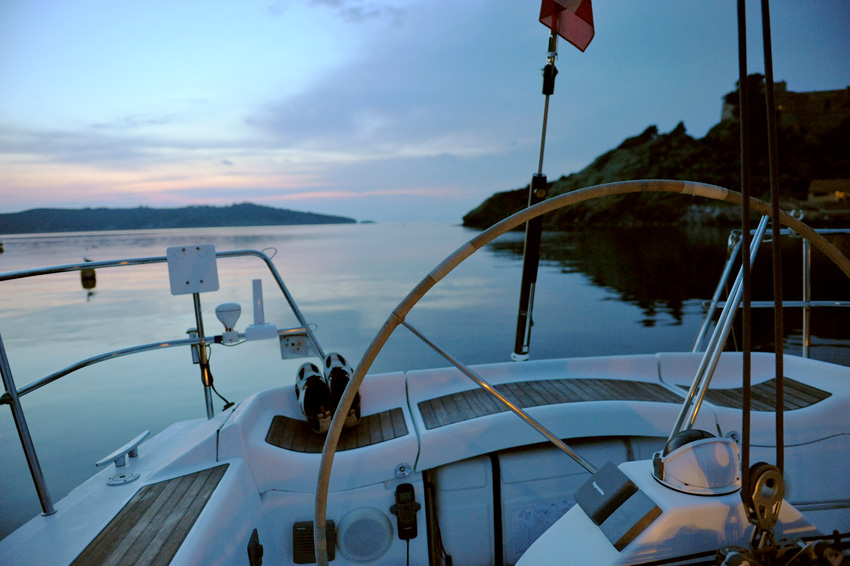 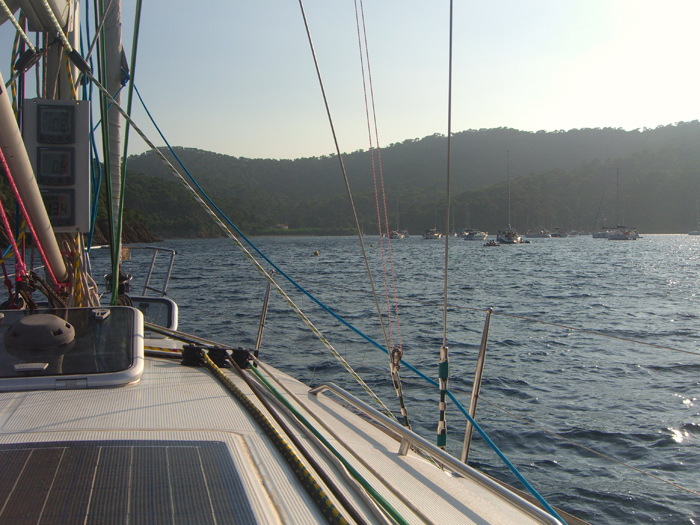 Why we go there, hundreds of fish swim around the boat… 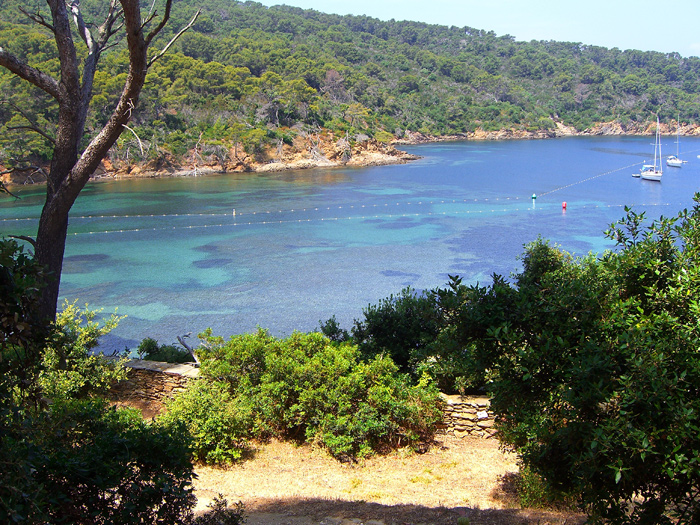 Bay of Port Man seen from above

Port Cros, walking on the hills on the island, looking East; in the background Ile Levant

There are a number of anchorages along the coast in this trip that can be used though care is needed with the weather, especially watch for signs of a NW mistral when you are sheltering from the SE marin. The anchorage on the E side of Baie de Bandol is useful although there is a bit of slop in here until the marin dies down. The anchorage on the NE side of Ile des Embiez affords good shelter from the marin in convenient depths, though take care not to go too close in as a land breeze may blow from the opposite direction to the marin, from the N-NW at night, and put you aground in very sticky mud. The anchorage off St Mandrier is better than it looks and affords good shelter from E-SE winds. If it blows up there is shelter close at hand in St Mandrier marina or the Darse Vielle in Toulon. There are anchorages around Ile de Porquerolles and Ile de Port Cros, but these are overcrowded in the summer, especially at weekends. Fortunately many of the boats here will depart in the late afternoon and return to a marina for the night. Around the southern edge of the Maures Massif there are numerous anchorages suitable in settled weather, like the Anse de Cavaliere, but with strong winds from any direction the anchorages are not really up to much and you will need to seek shelter in one of the nearby marinas. 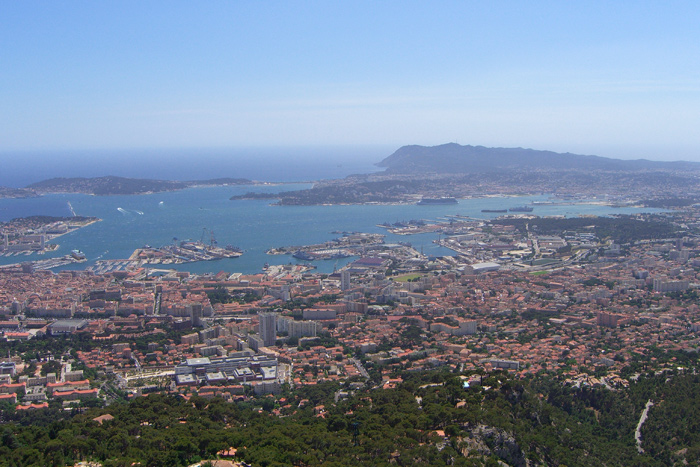 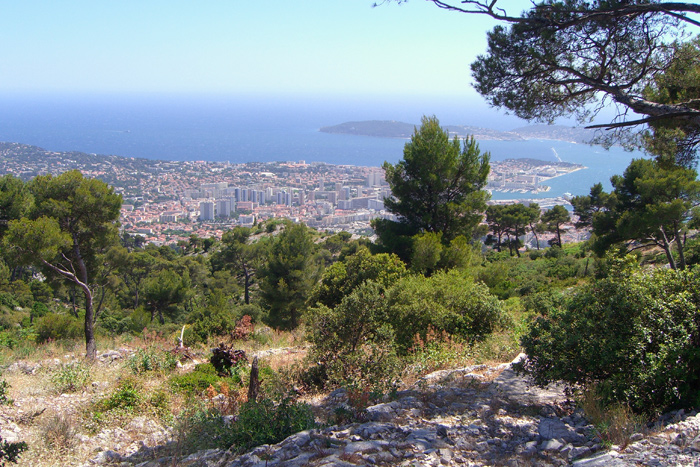