The languedoc weather / Golfe du Lion weather situation has the highest percentage of gales in the Mediterranean. Fortunately most of these are in the winter and in the summer it is a more benign place with the prevailing onshore sea breeze, the marin.
That said it is important to pick a good weather window for any prolonged voyage across the gulf.

Mediterranean regions occur between approximately 30° to 40° north and south latitude on the west sides of continents. Temperatures in these areas are from warm to hot in the high sun season with high evaporation rates and are mild in the low sun season with reduced evaporation rates. These regions have thus been called ‘winter-rain and summer dry’ climates.

The dry summer climate of mediterranean regions arises from the seasonal change in position of the semi-permanent subtropical high pressure systems which are centered over the tropical deserts roughly over the tropics of Capricorn and Cancer. The westerlies that are produced provide a constant stream of dry and warm air to the Mediterranean regions, some like Santa Ana can be quite strong with real threats of fire. As the subtropical high retreats towards equator during the winter, maritime airmasses and cyclonic storms developing along the polar front make their way into the Mediterranean region bringing coolness and moisture.

Routes along this coast really involve day-hopping between marinas and you can happily potter along the coast with distances of 20 miles or less between marinas.
Alternatively pick a weather window and do a trip or an overnighter right across the gulf. From Port Vendres to Sete is around 58 NM. From Port Vendres to Port Camargue is a tad of 71 NM. 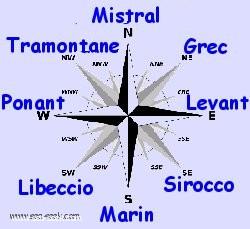 Although weather forecasts are much advanced on what they were even ten years ago, it can still be difficult to predict a tramontane or mistral very far ahead as it seems just a slight variation in the eastward path of a depression can produce significant differences in wind strength.

The Gulf of Lion (French: Golfe du Lion) is a wide embayment of the Mediterranean coastline of Languedoc-Roussillon and Provence in France, reaching from the border with Catalonia in the west to Toulon.

Winds in the Languedoc-Roussillon Area

Mistral
The prevailing winds in this area are from the N and NW, especially in winter during the stormy season. Gales are rare in summer.
Golfe de Lion is notorious for bad weather and sudden changes. Strong NW winds, known as the Mistral, may frequently blow for a week and may even persist for a month in winter.

The mistral takes place each time there is an anticyclone, or area of high pressure, in the Bay of Biscay, and an area of low pressure around the Gulf of Genoa. When this happens, the flow of air between the high and low pressure areas draws in a current of cold air from the north which accelerates through the lower elevations between the foothills of the Alps and the Cevennes. The conditions for a mistral are even more favorable when a cold rainy front has crossed France from the northwest to the southeast as far as the Mediterranean. This cold, dry wind usually causes a period of cloudless skies and luminous sunshine, which gives the mistral its reputation for making the sky especially clear. There is also, however, the mistral noir, which brings clouds and rain. The mistral noir occurs when the Azores High is extended and draws in unusually moist air from the northwest.
The long and enclosed shape of the Rhone Valley, and the Venturi effect of funnelling the air through a narrowing space, is frequently cited as the reason for the speed and force of the mistral, but the reasons are apparently more complex. The mistral reaches its maximum speed not at the narrowest part of the Rhone Valley, south of Valence, but much farther south, where the Valley has widened. Also, the wind occurs not just in the Valley, but high above in the atmosphere, up to the troposphere, three kilometres (1.9 miles) above the earth. The mistral is very strong at the summit of Mont Ventoux, 1900 meters in elevation, though the plain below is very wide. Other contributing factors to the strength of the mistral are the accumulation of masses of cold air, whose volume is greater, pouring down the mountains and valleys to the lower elevations. This is similar to a foehn wind, but unlike a foehn wind the descent in altitude does not significantly warm the mistral. The causes and characteristics of the mistral are very similar to those of the Tramontane, another wind of the French Mediterranean region that is more located to te Southwest part of the Languedoc and Roussilon.
Cap Leucate and La Franqui are good places to get a more than fresh breeze… 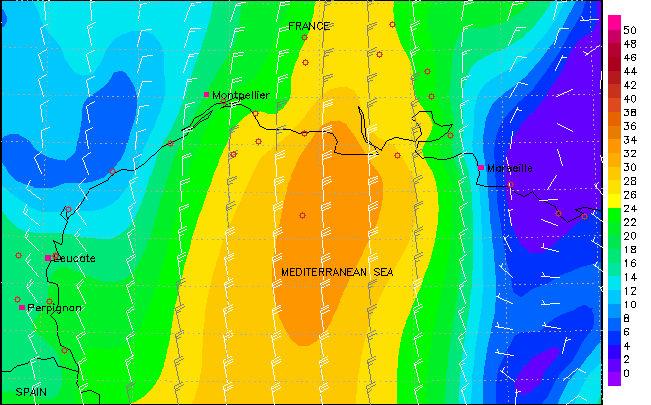 A typical ‘Mistral’ situation, in autum.
Fortunatly in summer the Mistral blows not as often and especially seldom at this strenth.
Yet enough wind not to go sailing and discover the surroundings of this nice area… 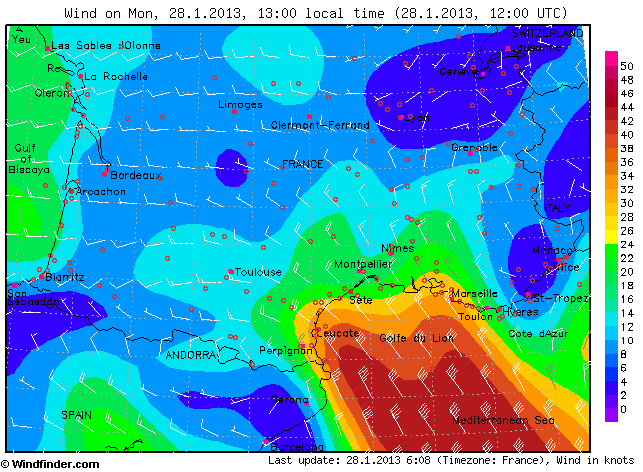 Tramontane
The Languedoc and Roussillon, the prevailing wind, cold, dry and violent blows northwest: it is called the Tramontana. The north accelerates passing between the Pyrenees and the southern Massif Central. Plain that wind is associated with a dry and sunny weather, by foehn effect. Mistral and Tramontane are very close by their origins and effects. They settled to the same periods. The north above the mistral few hours and often stops before him. 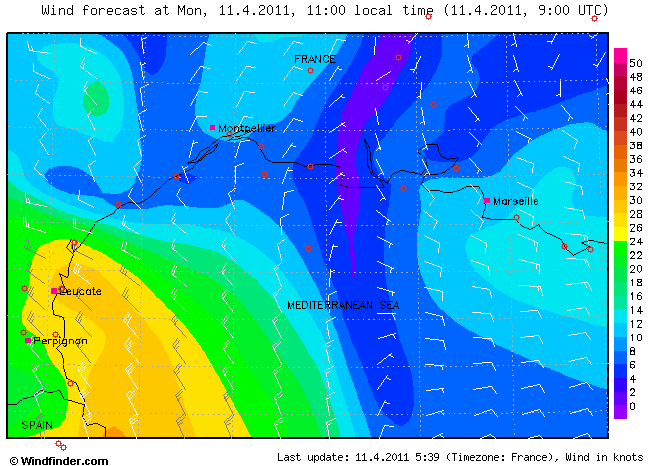 Marin
Marin is a southerly wind (south-east to south-west) blowing over the Gulf of Lion and Provence. This is a wet wind – it picks up moisture over the Mediterranean Sea.
The Marin is often accompanied by rain and rough seas can built up.
The sailor is associated with the onset of warm depression on the forehead region. 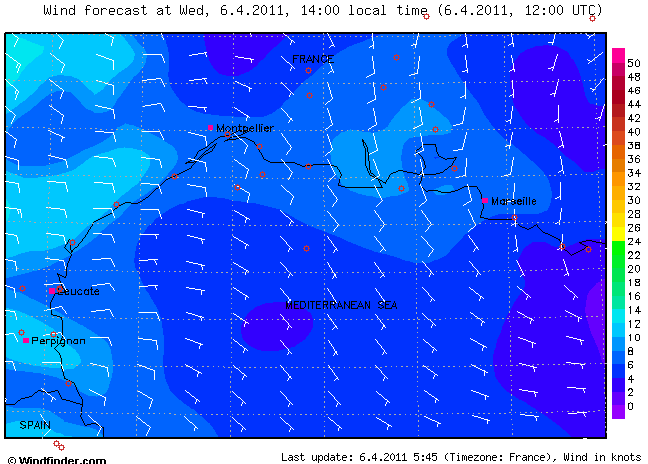 Fog
Fog is frequent, particularly during E winds, off the coast between Port-Vendres and Cap Leucate.
The prevailing currents along this coast set W and SW, but they are generally weak and overridden by local surface currents caused by the winds. After strong SE winds, a current usually sets W between Pointe du Sablon and the Golfe de Fos and may attain a rate of 3 knots.