Gruissan is on the Mediterranean coast near Narbonne, between the hills of the Clape
(rocky hillside of pine trees and vineyards known as the garrigue), the lakes frequented by the pink flamingos. Gruissan was originally a fishing village on a small island surrounded by marshland. The narrow streets of Gruissan village encircle the ruined 13th century castle tower. The heart of the village of Gruissan is a small fishing harbour, next to the castle. It is always lively, but especially in June. On 29th June the local fishermen celebrate the feast of Saint Peter, the patron saint of fishermen (and of Gruissan). Watch the processions and the blessing of the boats – a Christianised remnant of Languedoc’s pagan past.
In recent years a modern yachting marina, with holiday apartment buildings around the palm-lined quays, has been built.
Three mornings each week, the village holds an open-air market. Brightly decorated stands offer local produce: fruit, vegetables, wine, fish and other sea food. You can even buy fresh fish direct from the fishermen.

As in many Languedoc towns and villages, the narrow streets of Gruissan have grown organically around a donjon or castle tower. This one, largely in ruins, dates from the13th century. A tower was originally constructed here at the end of the Tenth century to keep an eye on ships sailing towards the harbour of Narbonne and so help protect the city against pirate sea raids and berber incursions. A hundred and fifty years later, Guillaume of Broa, Archbishop of Narbonne, strengthened it and flanked it with a tower now known as the Barberousse Tower (“Red Beard” Tower). The tower was dismantled in the Sixteenth century on the orders of Cardinal Richelieu and has been neglected ever since.

Apart from fishing, the other traditional industry around Gruissan is salt making – it is the residue of evaporated sea water. You can see the “fields” of salt water and piles of brown and white salt – called camelles because of their resemblance to the humps of camels. Salt pans cover a total surface area of almost 400 hectares between the sea and the island of St Martin. The harvest has grown from around 5 tons in 1912, to more than 30,000 tons today, in a good year. The salt, “Fleur de sel” from the Audois region competes with a similar product of the same name made a little further north along the coast in the Camargue. The salt-works are protected against heavy seas by a mile long sea wall. Driving along the coast road, you can see large white camelles. Water is pumped into the salt pans in spring. It evaporates during the summer, and salt is harvested in autumn. During the summer, you can take a guided tour around the salt pans.
Tourist Office
1 boulevard du Pech Meynaud
11430 Gruissan
Tel: 33 (0)4 68 49 09 00 or (0)4 68 49 03 25
Website: http://www.tourisme.fr/office-de-tourisme/gruissan.htm (In French only)

Marina Gruissan
The Marina has 1300 moorings for boats 30 meters of length and a maximum draft of 2.50 meters. The basic needs of its customers will be well met, because it has water, electricity and gas station. In addition, this marina has a wide range of services: bar, restaurant, wifi, 24 hour security, weather, laundry, supermarket… Upon your arrival, the personnel at the port will be there to assist you in any way they can to help you get to your mooring. Those who enjoy playing nautical sports at sea may request more information at the marina about the various sporting activities, which it arranges. This marina allows its clients to work on the spliway or pull their boat into the water, as it has a travelift 12 to 50 tons. They also offer several boat repair services. 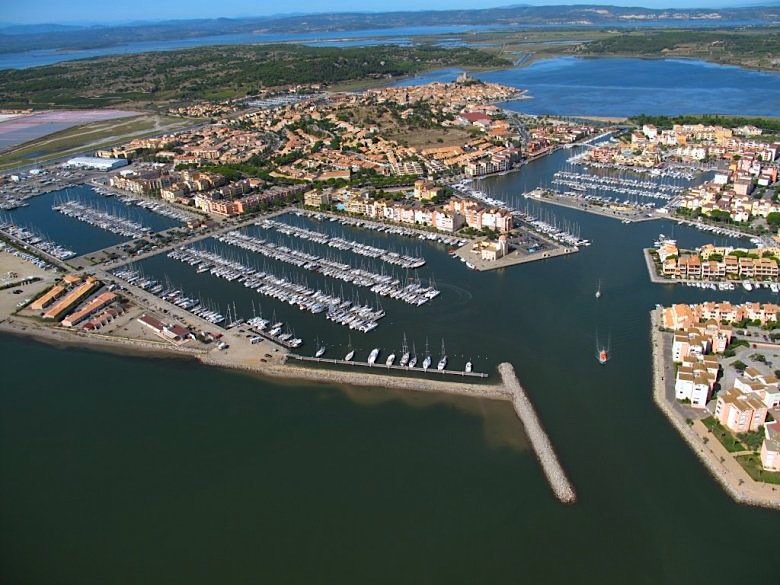 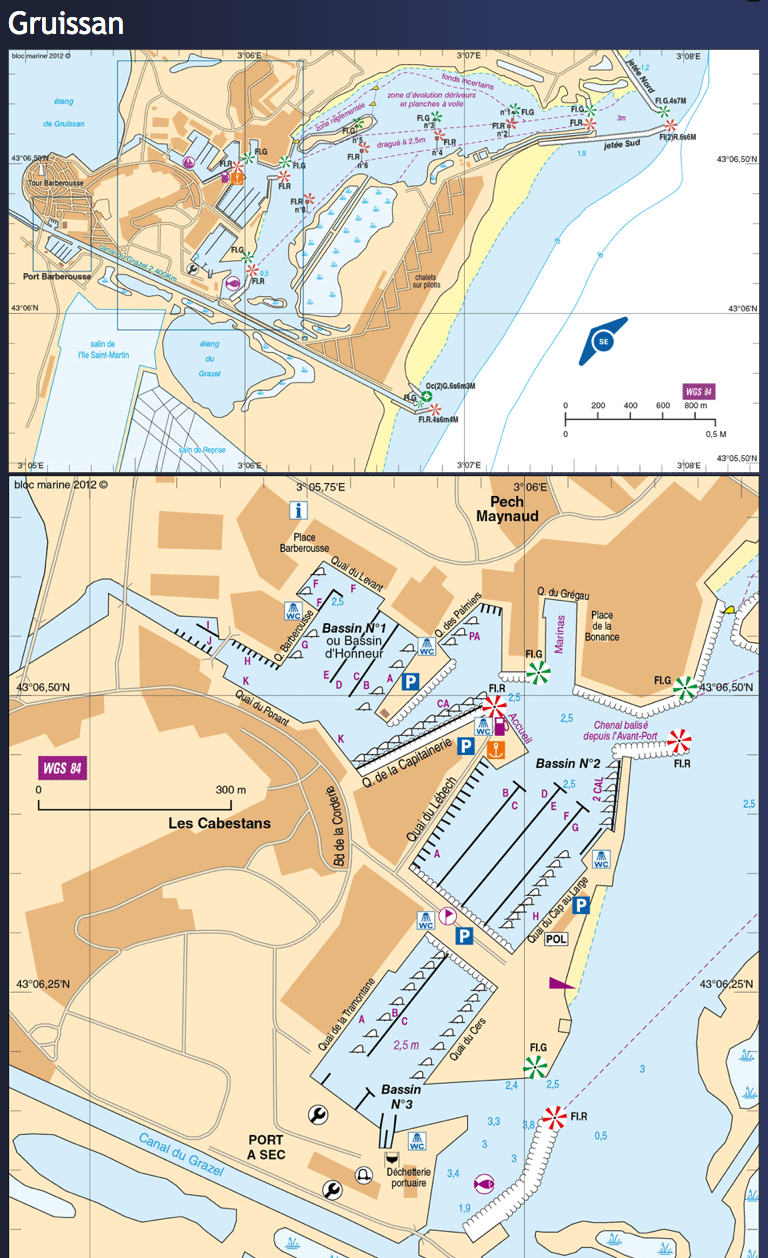 Gruissan Plage
A very nice place to visit is the vilage of Gruissan Plage, that is completely built of wooden houses on (wooden) poles.

Gruissan Plage has been the setting for the French film, Betty Blue, a film about two passionate lovers living in a beach hut.
It is still a wonderful setting, especially when you are not there in high season.

Unfortunatly many houses now have built the spaces underneath as well but here you can see how they originally were, as this one is being renovated 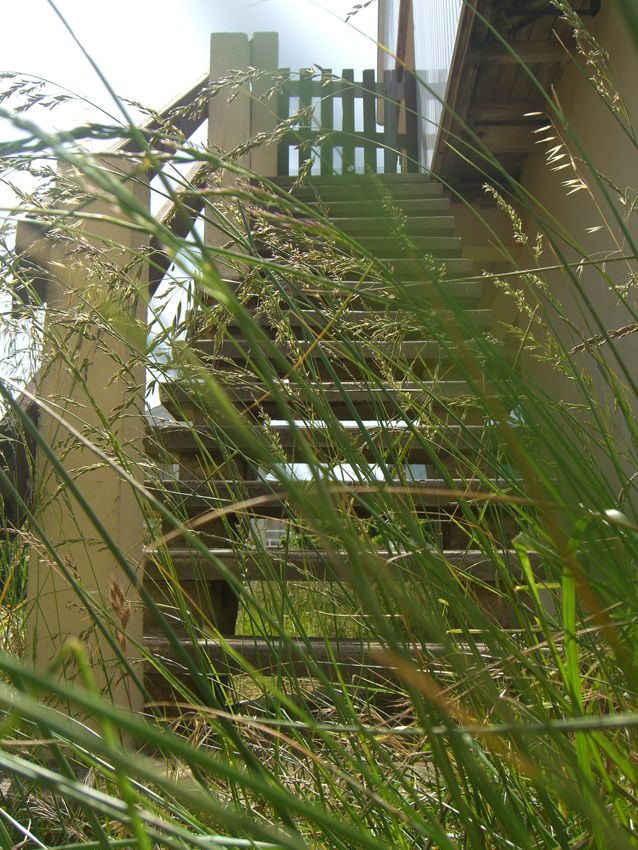 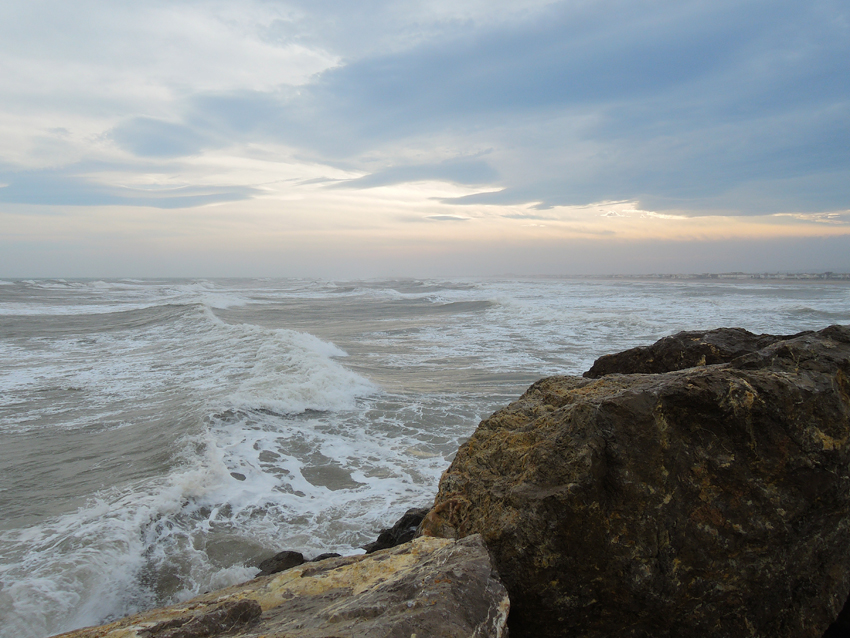 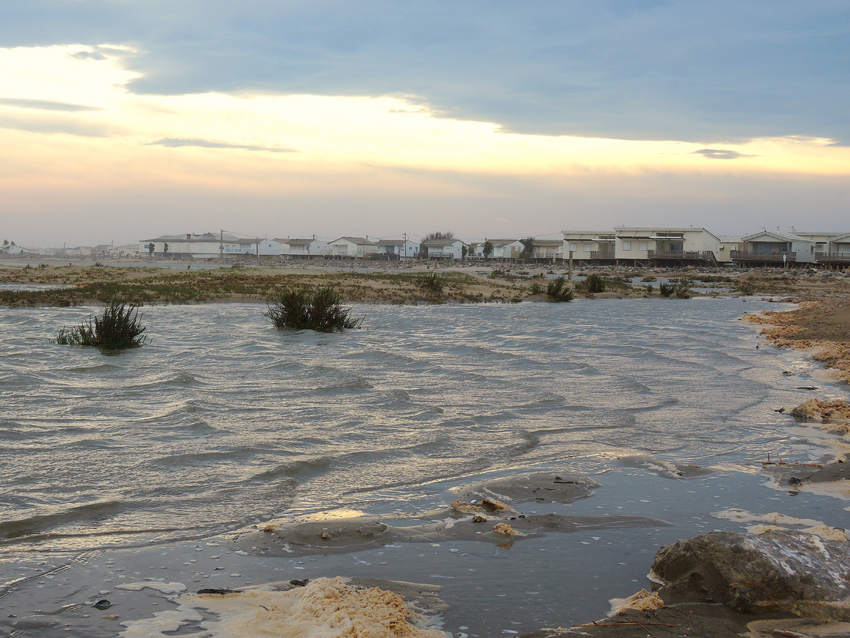 the next day all was quit again, leaving little of the beach.. 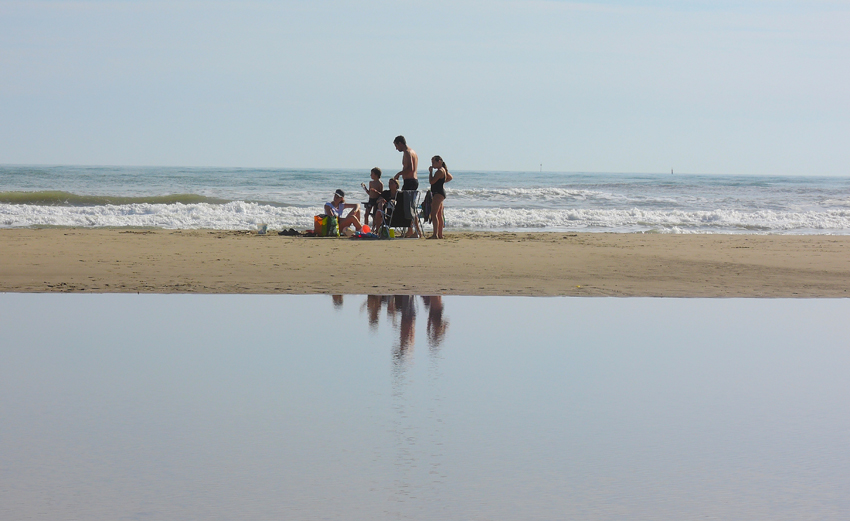 A fine example ofa  house that need some ‘care’..

Behind Gruissan lies the Montagne de la Clape, where you can walk, do VTT tours and visit the Maritime Graveyard and a beautifull chapel 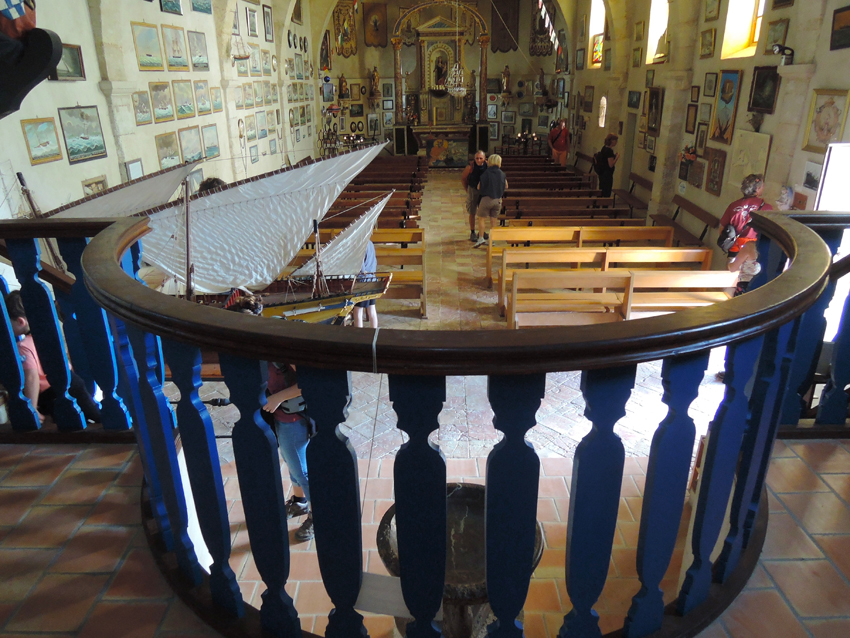 You can also visit the chapel Notre Dame des Auzils, on top of the Massif de la Clape. A steep path winds through a tree-shaded “sailors’ cemetery” – a cemetery without bodies (the 26 memorials lining the path are all to people lost at sea). Walk up a path amongst pine trees climbing the hillside, past a herb garden and a hermit’s cave, to the chapel. Here there is a spectacular view of the coast. On entering the chapel you will see a collection of paintings, model ships, and marine memorials. The 13th century chapel (open from 3–6 p.m. during the summer) contains sailors’ votive offerings, placed here to buy safety on their journeys. Some 60 of them were stolen in 1968, so the local priest had them replaced by trompe l’oeil paintings. On Easter Monday, there is a procession to the chapel, where a service is held for those at sea.

Nearby are vineyards, including some particularly good ones, for example around the foothills of the Clape Mountain. This terroir enjoys a mild and suitably windy microclimate, suitable for the red, rosé and white wines. These wines, made from a wide range of grape varieties, were awarded the classification of AOC (appellation d’origin controllé) in 1985.

For white wines the dominant grape variety is Bourboulenc, when combined with the white Grenache, Clairette and Maccabeu, it produces pale straw coloured wines with a subtle aroma of flowers.

Reds are balanced and are made mainly from Syrah, Mourvèdre, and Grenache grapes and to a lesser extent Carignan and Cinsault grapes, they offer a rich bouquet with aromas of spices and the local garrigue. They often age well.