Port Camargue is situated at the Eastern side of the Languedoc, where the Camargue starts. It is a huge Marina with thousands of berths.
Shelter is good, take care entering when there is a strong Mistral, but once inside shelter for the Mistral is okay 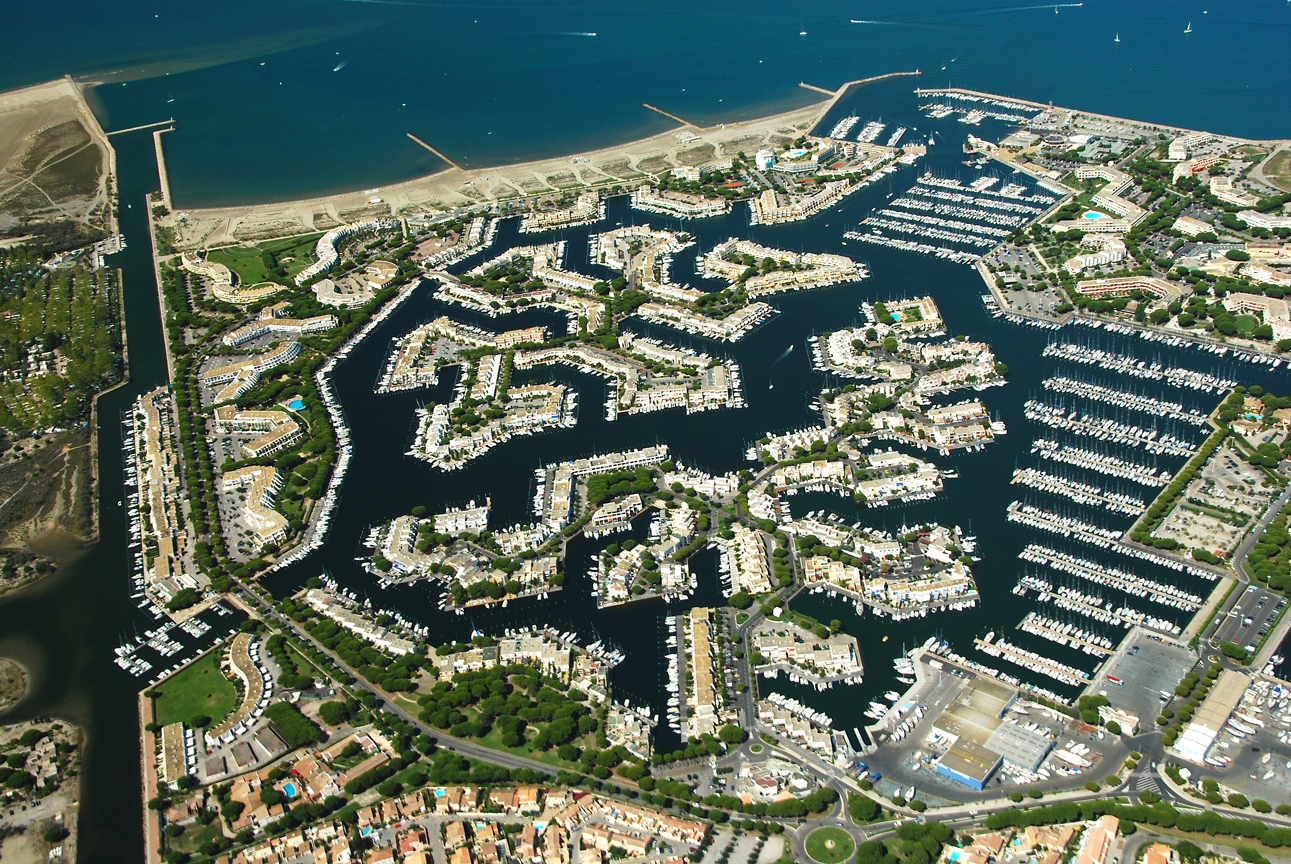 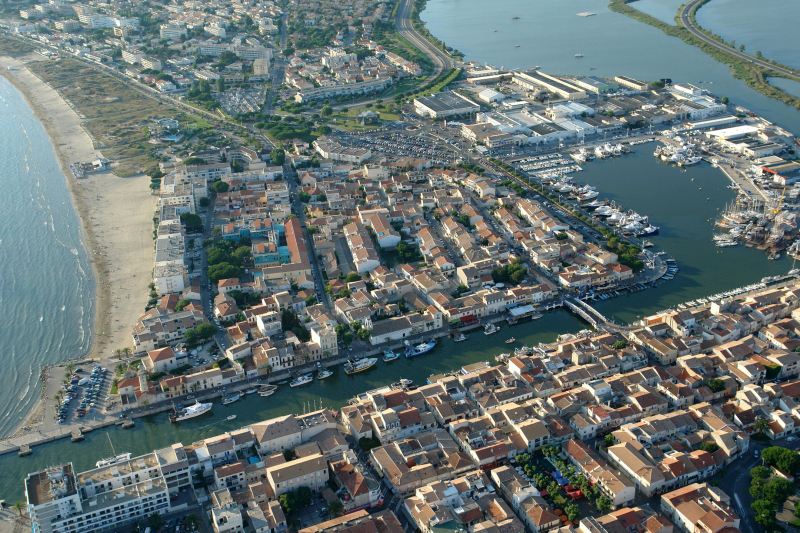 Le Grau-du-Roi comes from the occitan word grau (Latin gradus), which refers to the opening of an étang (shallow saline lake), or the watercourse from an etang into the sea. It is roughly equivalent to the usage of the English term bayou.
Le Grau du Roy still breaths this original typical French atmosphere, unlike the neighbour cities La Grande Motte and Port Camargue.
The cays around the Harbour are charming, with lots of restaurants and bars located next to the canal. 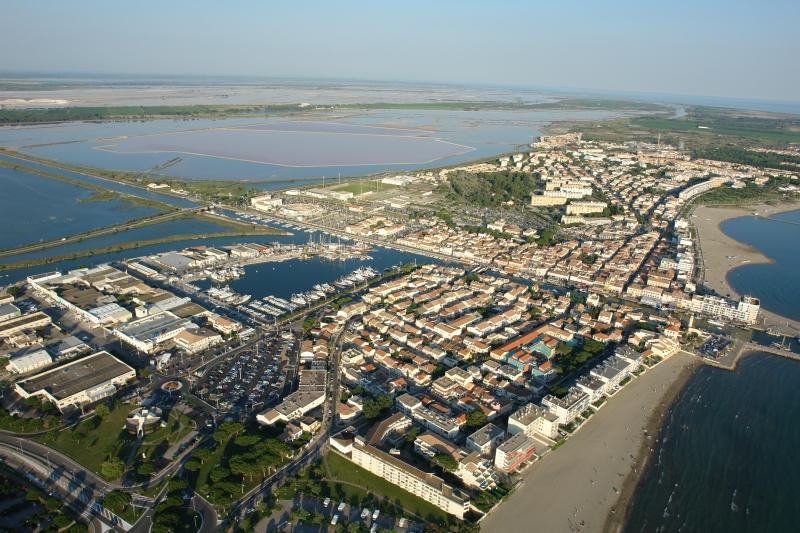 Le Grau du Roi  is the sole commune in Gard to have a frontage on the Mediterranean. To the west is the Herault department and La Grande-Motte village, and to the east is the Bouches-du-Rhone department. Using the sea as a vantage point, the commune has four distinct sections: the right beach (Plage de Rive Droite), the Village, the left beach (Plage de Rive Gauche), Port Camargue and L’Espiguette. Immediately landwards are the large shallow étangs, saline marshes, which separate it from Aigues Mortes, a neighboring mediaeval walled city that used to be a port.

The city of Aigues-Mortes gained importance during the crusades when it was a royal port. King Louis IX of France had no other port available to him on the Mediterranean. Ships docked alongside the ramparts of the city and passed through a circuitous channel, (the Old Channel) through the Étang de Repausset to the sea at Grau Louis (La Grande Motte). In 1570, a storm surge from the Rhone entered the etang and breached the costal strip forming a new grau. A six-kilometre channel was created from the city directly to the sea. In 1640 this was named the Grau du Roi, and although the name changed several times afterwards, it eventually reverted to its current name. In 1772 two breakwaters were constructed out of stone. After much subsequent work, it became a canal in 1845. 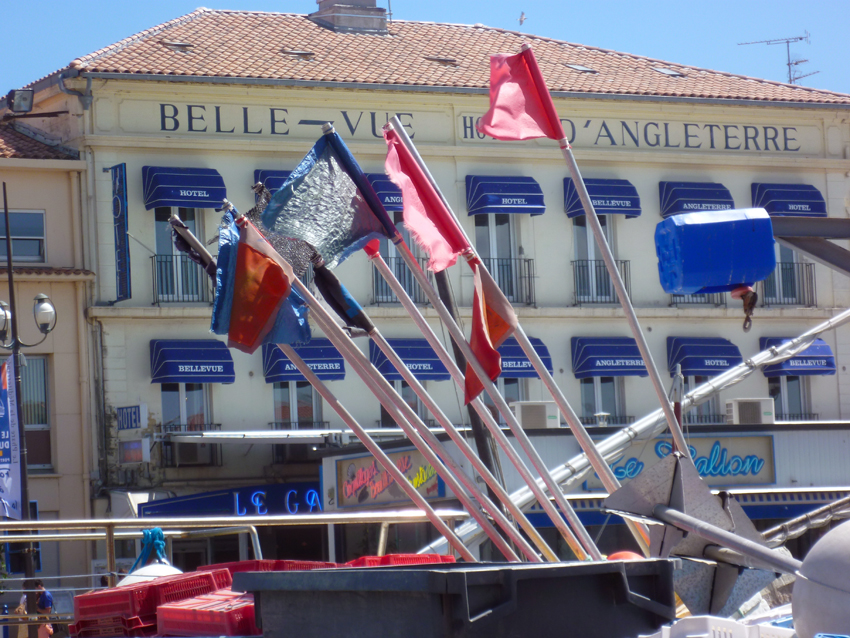 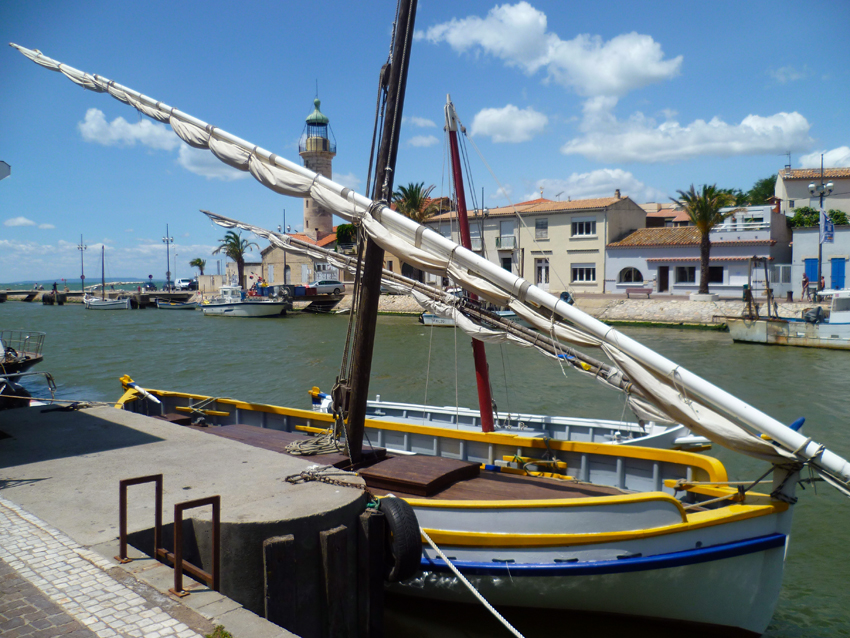 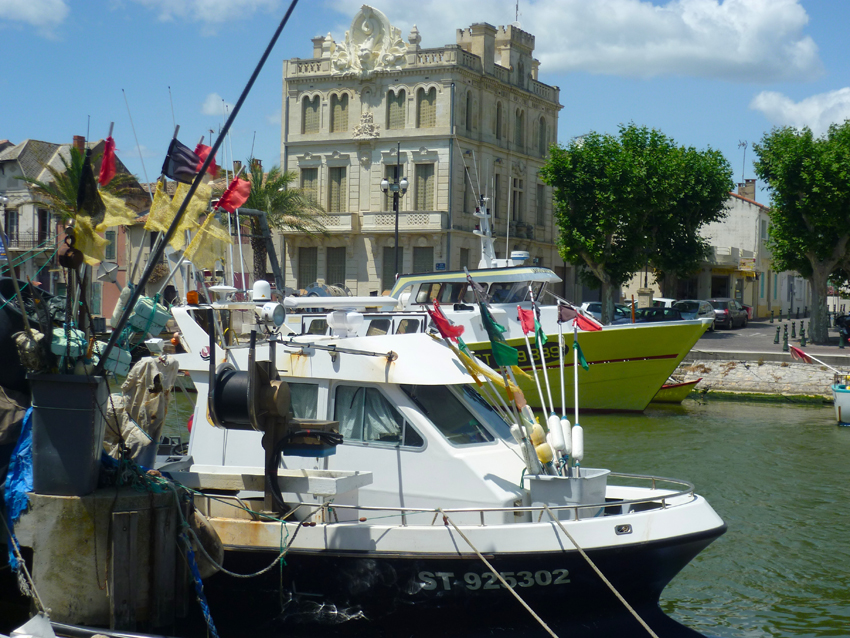 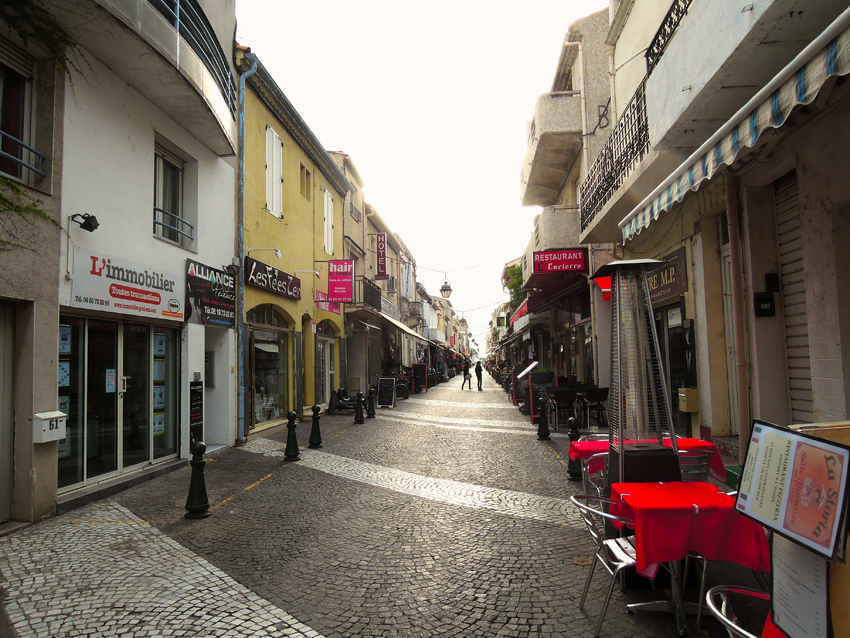 The village, based around fishing cottages, gained administrative buildings and was recognised as a section of Aigues-Mortes in 1867, becoming a separate commune in 1879. The village of fishers and farmers turned to tourism at the end of the 19th century, with the extension of the Nîmes Aigues-Mortes railway line in 1909: bathers arrived en masse, and on the 26 April 1924 the French President of the Republic decreed that Le Grau-du-Roi was a “station climatique et balnéaire” (beach resort town). The rail line enabled local producers to market their white grapes and fish nationally.
After the second World War, the coast started to rebuild, with a focus on tourism. The effort was coordinated by the plan Racine. Architect Jean Balladur was put in charge, and he designed structures capable of supporting a large amount of tourists, while also supporting the local way of life and environment. Part of the plan included the new marina at Port Camargue. This was launched in 1968 and finished in 1985

La Grande Motte
On the shores of the Med, next to the ports of Port Camargue and Le Grau-du-Roi, is the beach resort of la Grande Motte. It’s rather distinctive, in a “love it or hate it” kind of way.
Innovatively styled, the town was developed by architect Jean Balladur in the late Sixties following plans to transform the quiet, sun-drenched beaches of the Languedoc coastline into unique tourist destinations.
For those who love architecture of the Sixties, they belong probably to the group that loves La Grande Motte, I personally do for precisely this reason. 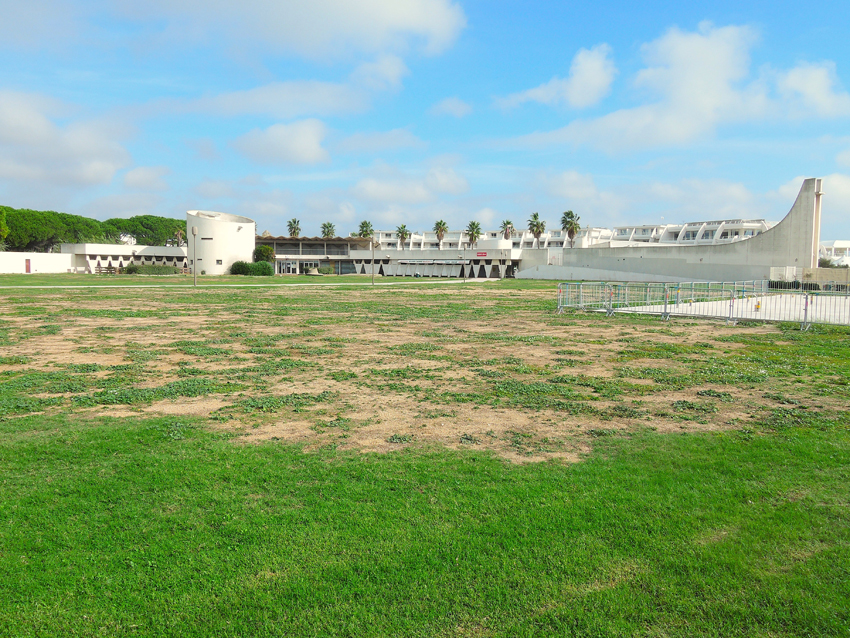 Unique isn’t really the word for this place. Formerly a desert of sand dunes and lagoons, La Grande Motte is now an inimitable holiday resort with architecture that consists of giant mole hills (mottes in French), based on Inca pyramids in Mexico and the nearby 638m Pic St-Loup, which dominates the skyline in the Coteaux du Languedoc (the architect Balladur cites both as inspiration). 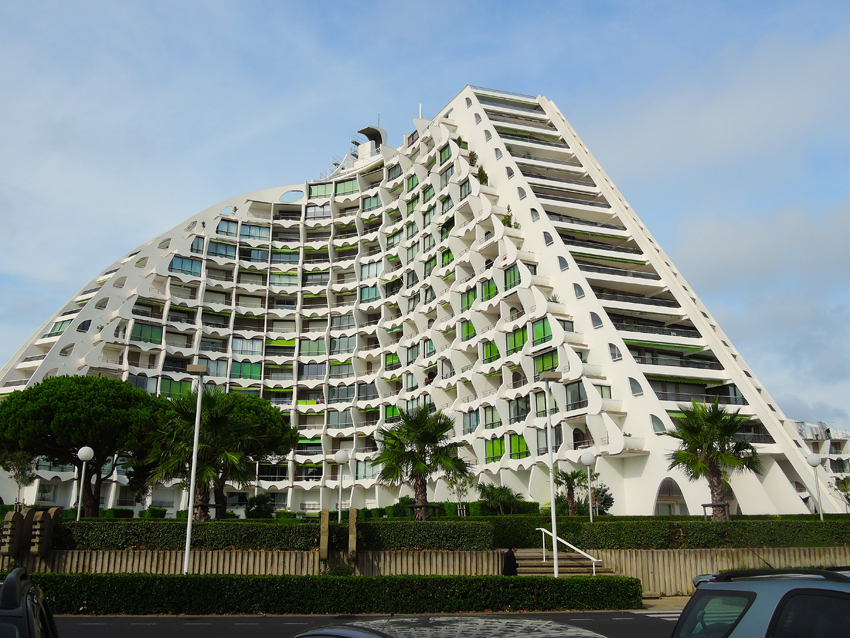 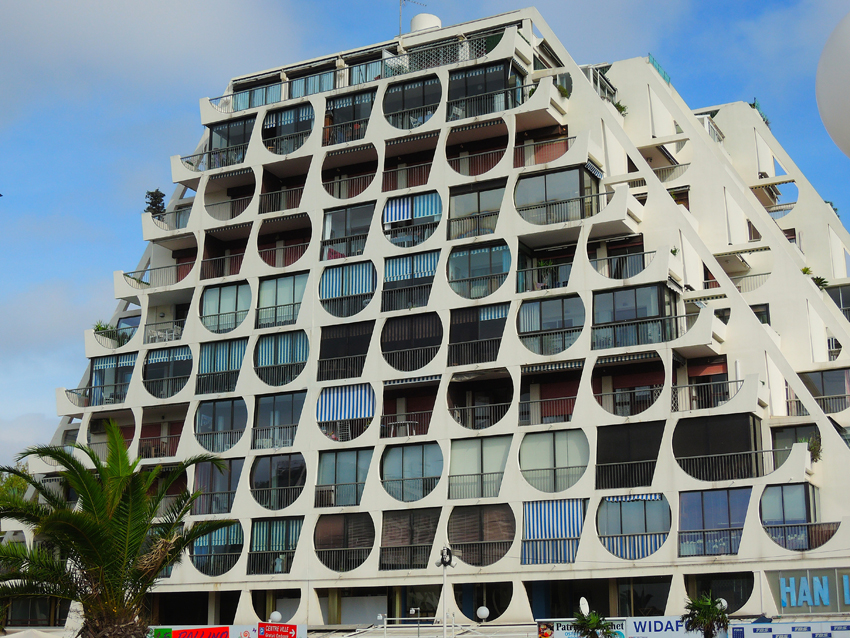 The buildings with their system of terraces with triangular, round and rectangular features are designed to provide wind and sun shields as well as spectacular sea views from each and every floor. 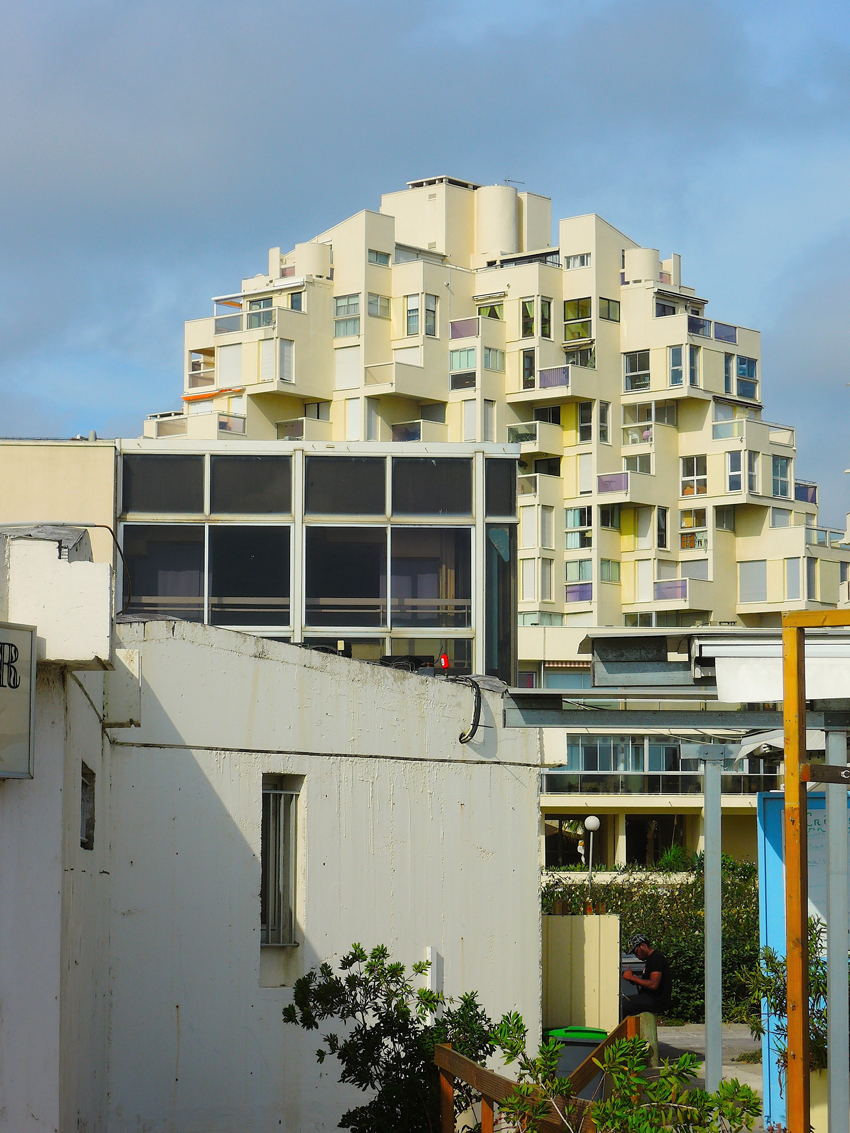 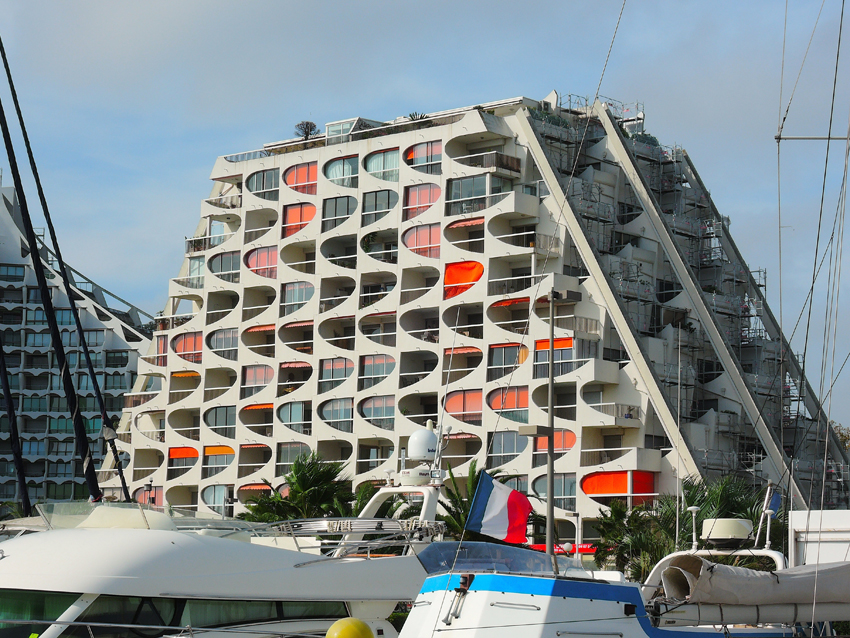 Aigues Mortes
A few miles inland lies Aigues-Mortes.
Aigues-Mortes means literally ‘dead water’, aigues coming from the Latin aqua.
It is a beautifull fortified city, with lots of discovery to do in the city and around 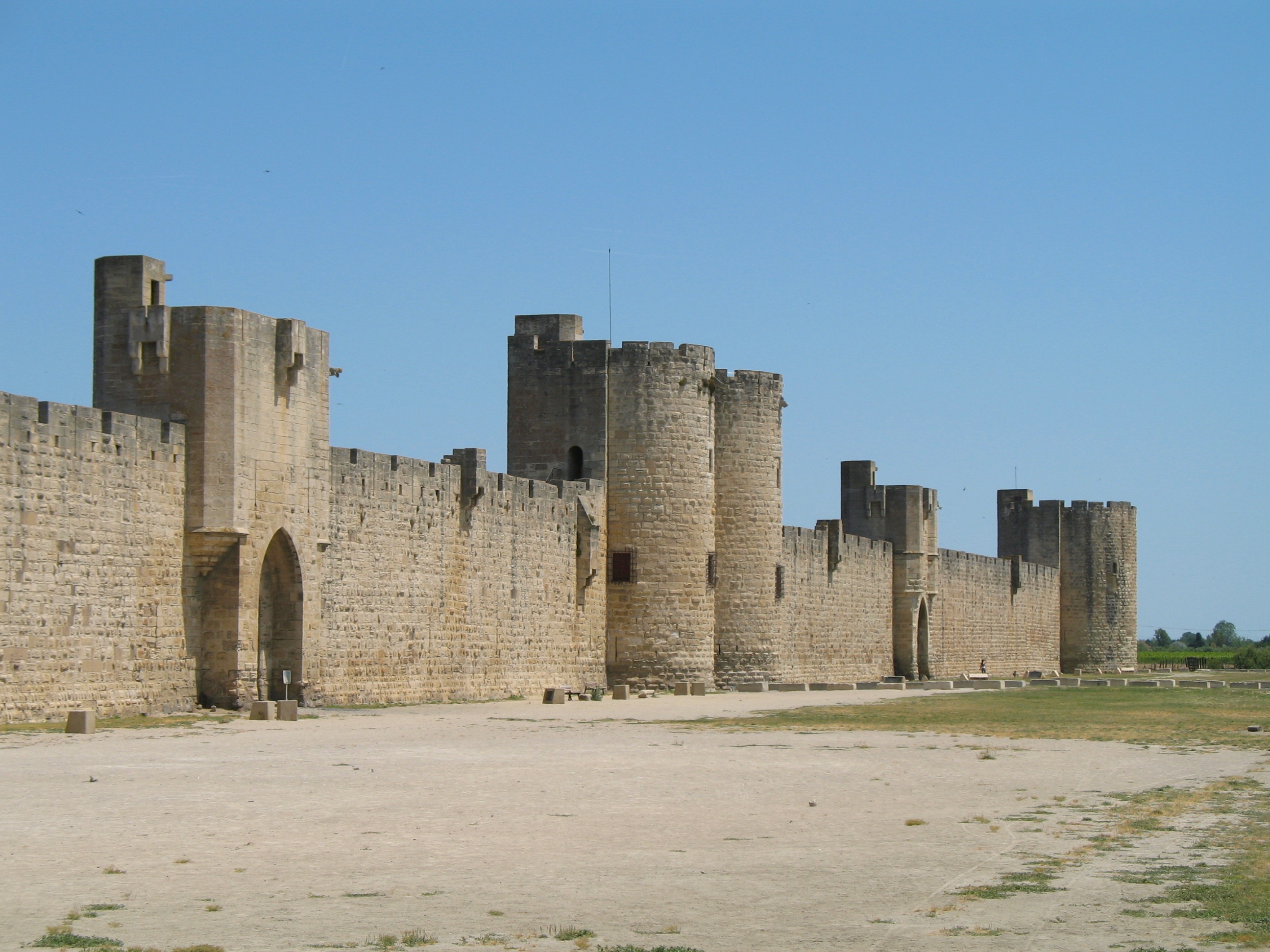