The languedoc-roussillon region is a beautifull region that not only produces some superb wines like the Picpoul de Pinet or the Muscat and the Muscat Sec, it is also an authentic region with harbours that can charm lots of sailors 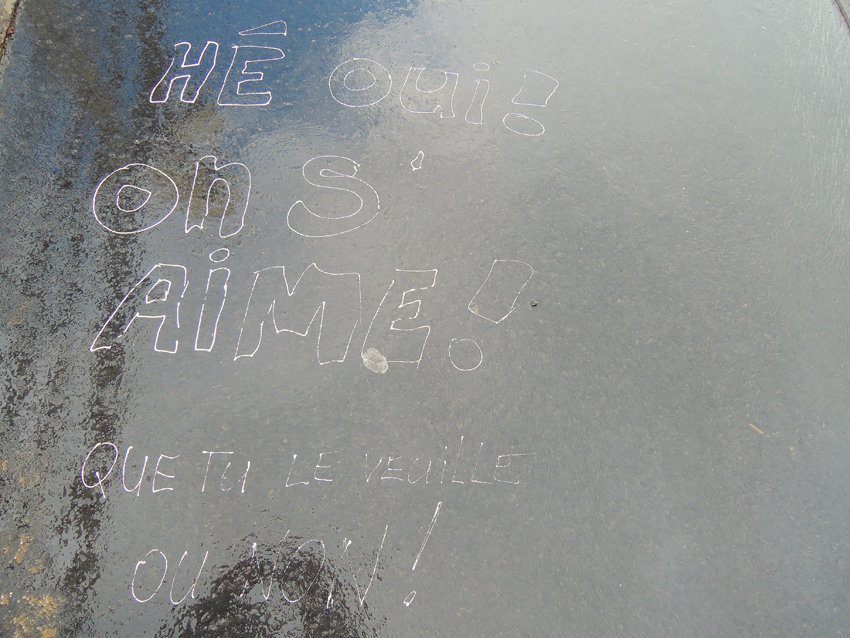 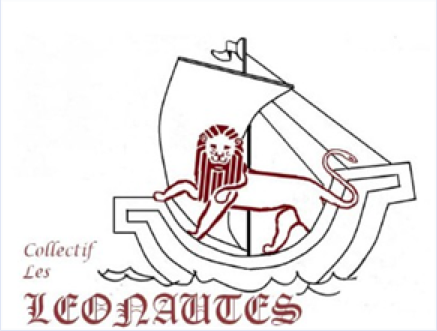 ‘Les Leonautes’ comes from the word Lion and Nautique, and stands as a symbol for the sailors in the Languedoc Area

Unfortunatly for sailors there are hardly any really useful all-round anchorages along this stretch of coast.
There are a number of ‘make-do’ anchorages depending on wind and sea. In high season the anchorage at Collioure is crowded, the Anse de Paulliles is than a good alternative, but sometimes also crowded.
In calm weather just off Cap Leucate (La Franqui) is nice, but weather (wind) can change quickly there.
Another option, possible if there is little Mistral, is off Cap d’Agde.
After that there is really nothing until you can tuck under the bight just N of Port Camargue right across the other side of the gulf. The anchorage at Port Camargue is just N of the entrance and provides some shelter from northerlies and from the SE marin. There are also several places you can anchor off the coast (at La Grande Motte for example) but these are tenable only in calm weather. 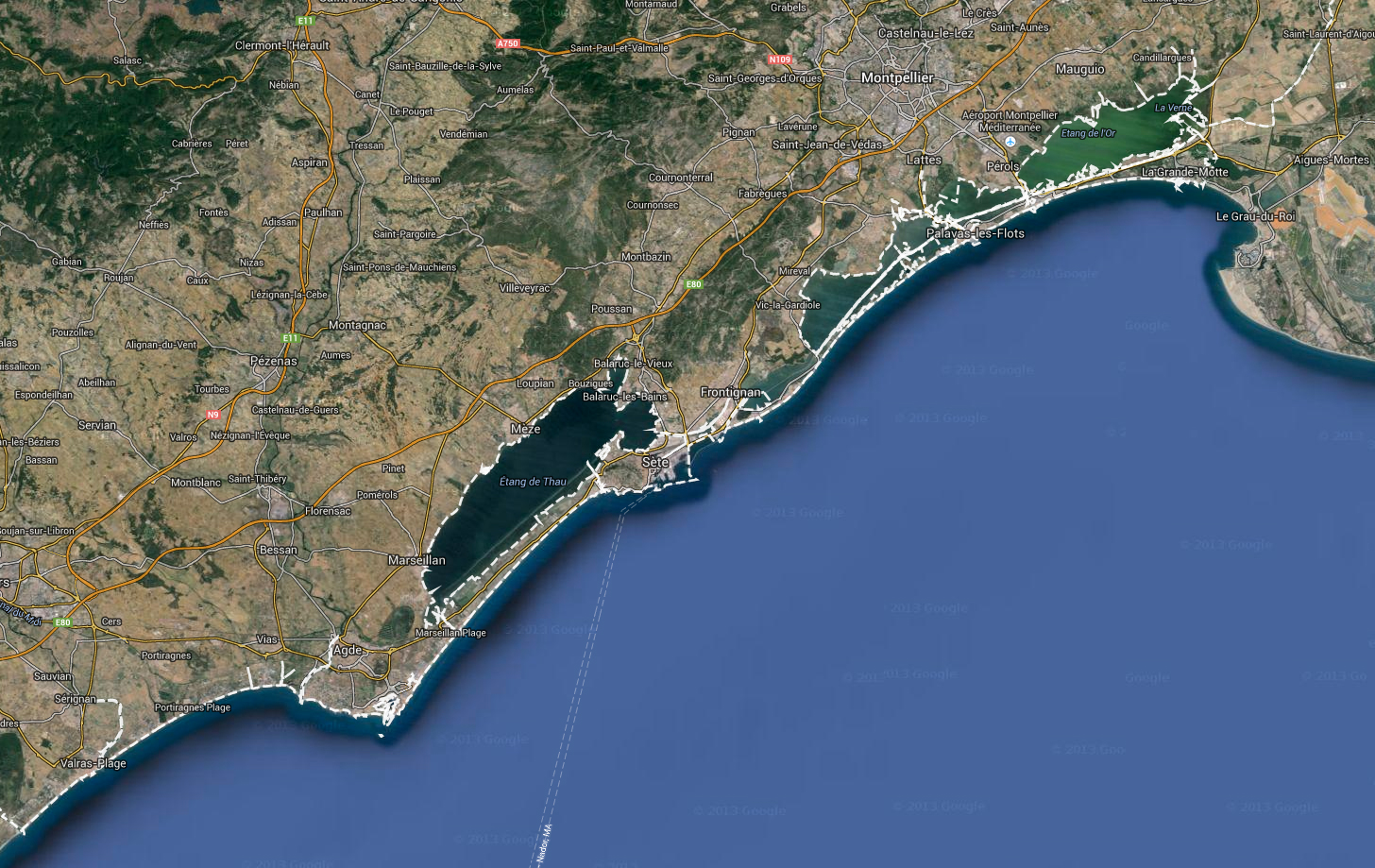 Some of the places below are not possible to visit by boat, but are all not too far from sea and can be reached eather by dinghy, and a short walk, or are situated near the Bassin de Thau, you have to pass the bridges and canal in Sete to get there.

Le Grau d’Agde Agde is a neighborhood located by the sea on the left bank of the Hérault. This is one of the three localities of the town of Agde (Hérault) with Tamarissière, on the right bank, and Cap d’Agde,

Located at the mouth of the Hérault, the delta has been since antiquity a safe anchorage for merchant ships, including those of the Phoenicians who settled there and founded as early as the prosperous town of Agde to around 600 BC. 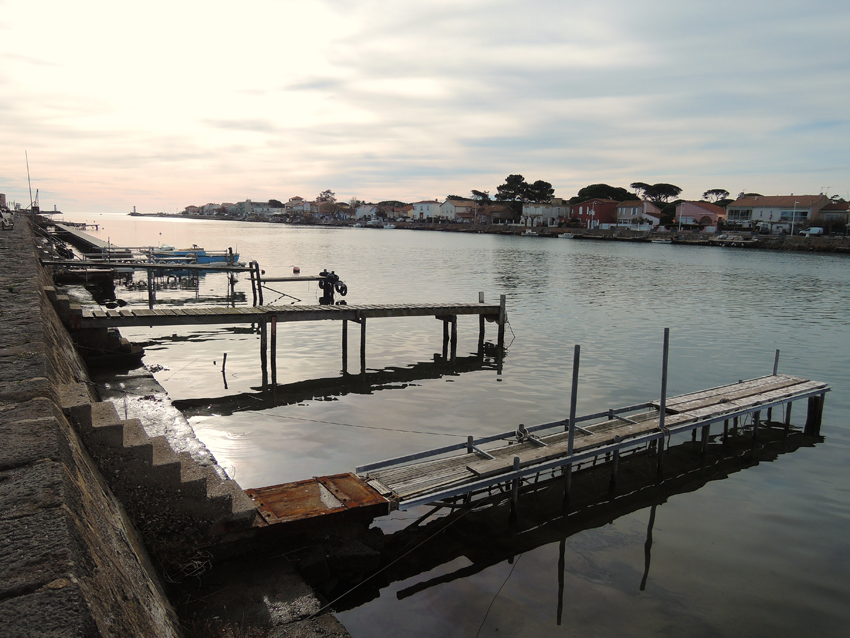 It became a picturesque fishing port, it is not until the late nineteenth century that the Grau d’Agde turned into a resort. 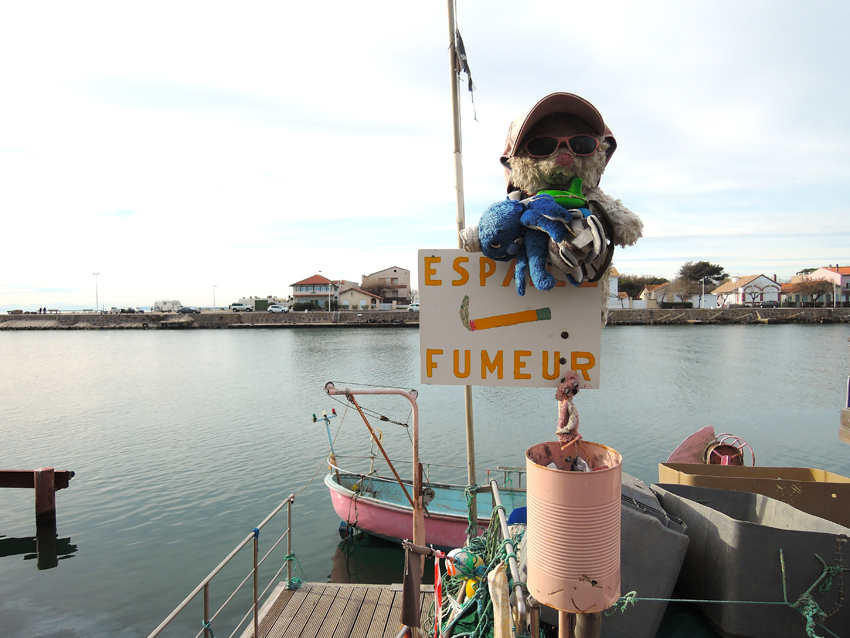 Le Grau d’Agde is known in Christendom since medieval times for its Notre-Dame de l’Agenouillade, so named because of the miracle that it would have happened. During a terrible storm, the sea penetrated nearly one kilometer inland, when all seemed lost, the Virgin Mary appeared to be praying on a rock and it would have left the imprint of his knee in the rock, rising water would then stopped at his feet; shortly after, the storm abated and the waters receded.

Maguelone Cathedral (Cathédrale Saint-Pierre de Maguelone or Cathédrale Saint-Pierre-et-Saint-Paul de Maguelone) was the cathedral of the former Bishop of Maguelone until 1563, when the see was transferred to the newly created Bishopric of Montpellier. Now a totally isolated structure, it is situated on the once easily defensible peninsula that was the site of the original city of Maguelone, opposite the present Villeneuve-lès-Maguelone, Hérault, France.

The cathedral, constructed when the see was returned here in the 11th century from Substantion by Bishop Arnaud (1030-1060), is a Romanesque fortified building. Although parts, such as the towers, have been demolished, the main body of the building remains functional and is a registered national monument. It is run by a dedicated preservation society and is used for both religious and secular purposes. 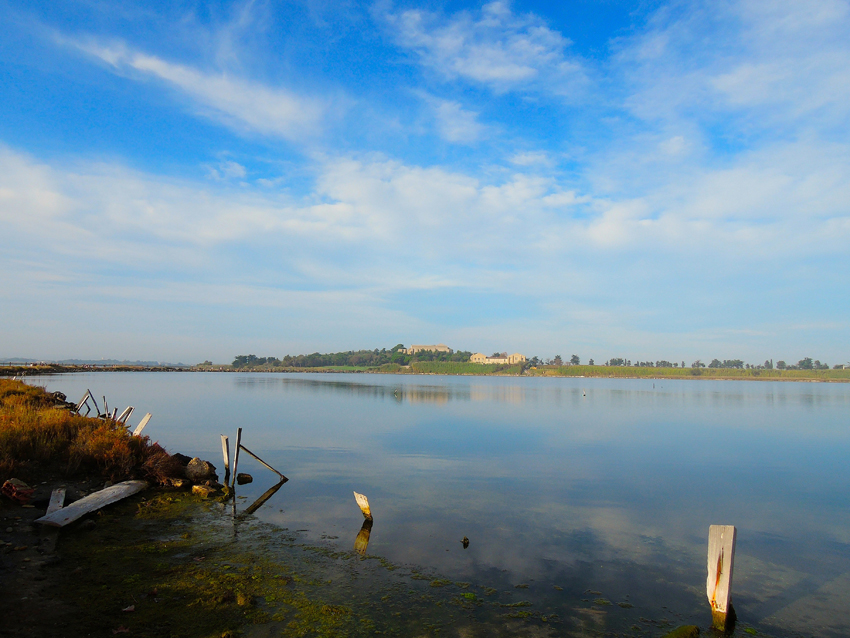 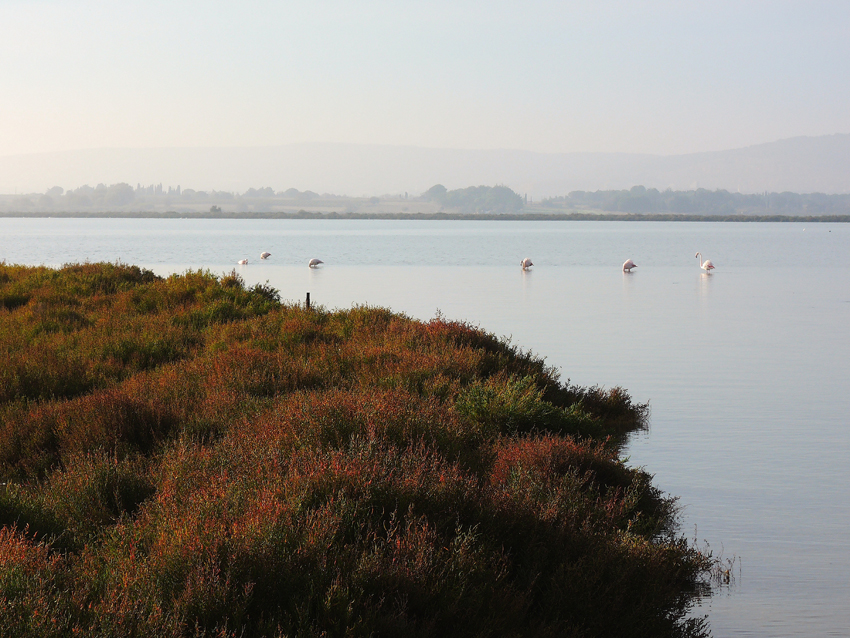 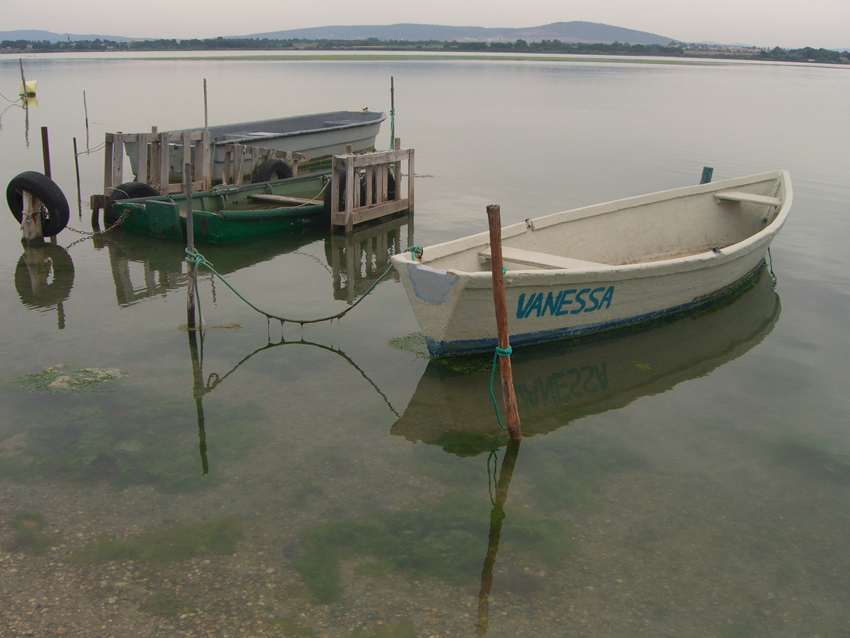 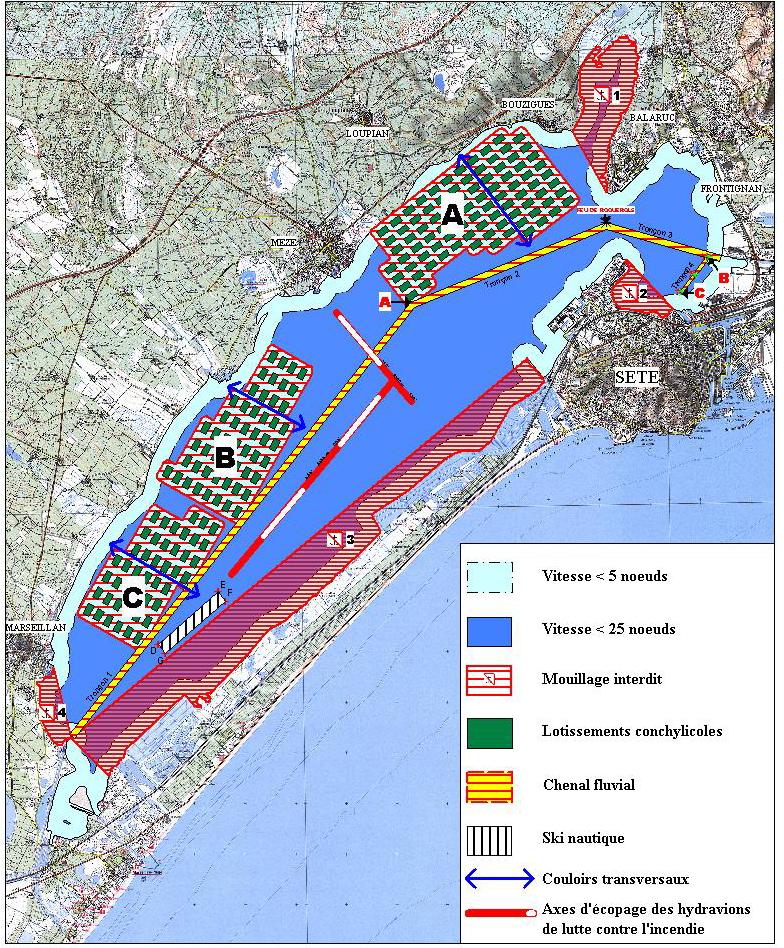 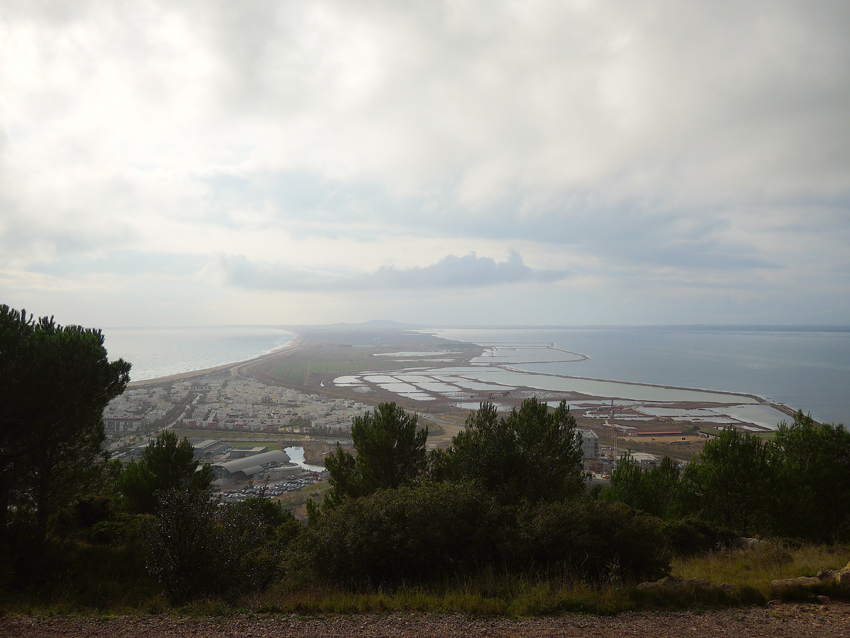 Sete looking at Agde, Bassin de Thau on the right side

Bouzigues
Bouzigues is situated at the Bassin de Thau and is known for it’s oysters and Mussels.
The first thing that hits you on arriving at Bouzigues is, not surprisingly, the lagoon. It’s around 20 kilometres long and 9 wide.
Bouzigues offers a real taste of the seaside, French-style, with gorgeous oysters and sea urchins (oursins) plucked from the lagoon.

In Bouzigues, and around the Thau bassin, oyster production – ostreiculture – uses oyster tables rather than oyster beds. You see these standing in the seawater across the lagoon, light-looking wooden frames from which cables are dropped into the water. The young oysters attach themselves and grow. If the heat is too searing in the French summer, the tables are covered to give some protection to the developing oysters. Once the oysters are ready to eat they can be fairly easily hauled in.

Bouzigues oysters develop in such pure water – Thau water is graded A – that they can be harvested and eaten straight away. As well as oysters, 3000 tonnes of mussels are produced here every year.

If you love oysters, you’ll love Bouzigues in the south of France. If you simply like oysters, you’ll love them once you’ve eaten oysters from Bouzigues. Bouzigues is a little village right on the edge of the Bassin de Thau, or lagoon of Thau – the second largest lake in France and open to the Mediterranean sea. It’s here at Bouzigues, in the Languedoc-Roussillon region of southern France, that oyster culture originated and the village name is synonymous with the best quality French oysters.

The bassin produces 18 sorts of shellfish but the uncontested speciality is the oyster – the huitre de Bouzigues. Discerning restaurants, fish mongers and individuals all over France source oysters from this pure lake, which produces 13,000 tonnes of the shellfish annually.

At Chez La Tchèpe (+33 4 6778 3319) on the seafront, you pick your shellfish at the counter and it is cooked and delivered to your table with, say, a bottle of Picpoul de Pinet. The area around is a wildfowl paradise, with flamingo-intensive lagoons within easy walking distance. 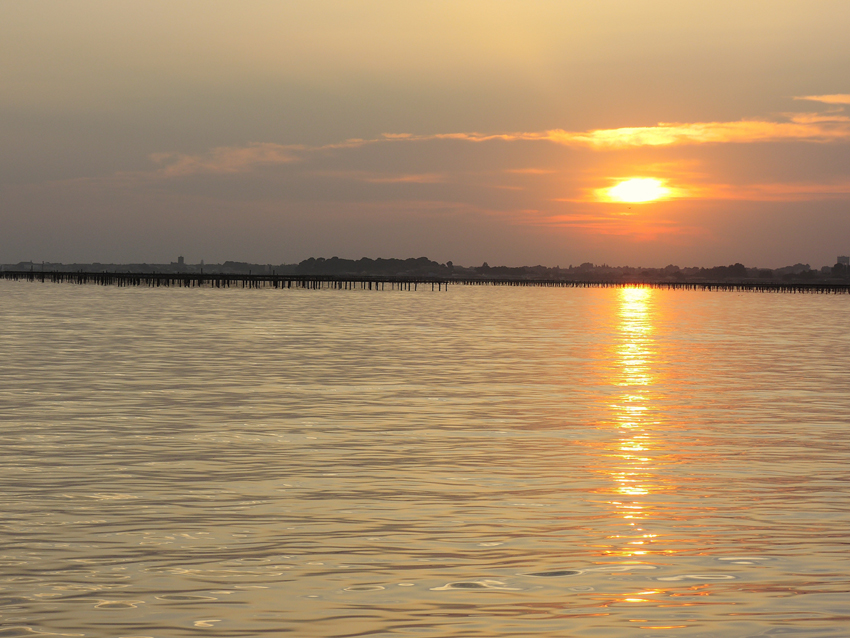 Marseillan
Marseillan sits on a large lagoon, the Étang de Thau, and is the southern entreport for the Canal du Midi.

The village is tranquil, with its heart still within the lines of the old walls. There is one small hotel and some 18 cafes and restaurants. For sun, sea and sand there is Marseillan Plage, a purpose built holiday resort on the Mediterranean itself, some 3 km (1.9 mi) from Marseillan Ville.

The port is a protected heritage site, and the altar and organ in the church are also listed. There has been virtually no new building in the heart of the village since the 17th century, and many of the houses date from the twelfth century. 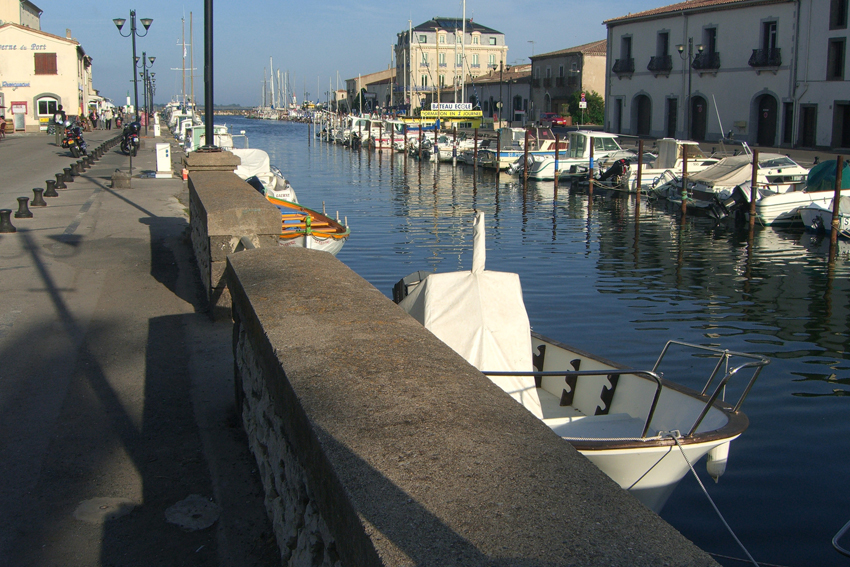 Wines
Table wines are produced, with the most acceptable being Picpoul de Pinet – an attractive white wine with a slight green tint and a little sparkle. About a million bottles annually are produced by the cave co-operative.
The Noilly Prat company came to Marseillan in 1853, and is still producing its vermouths on the same site. Mr Noilly had created the vermouth in Lyon in 1813. His son, with an English partner (Mr Prat), came to Marseillan to commercialise their product because the local wines were very suitable and the climate was ideal.

Between MArseillan and Marseillan Plage lies the Cave de Richemer, where often flee markets are organized 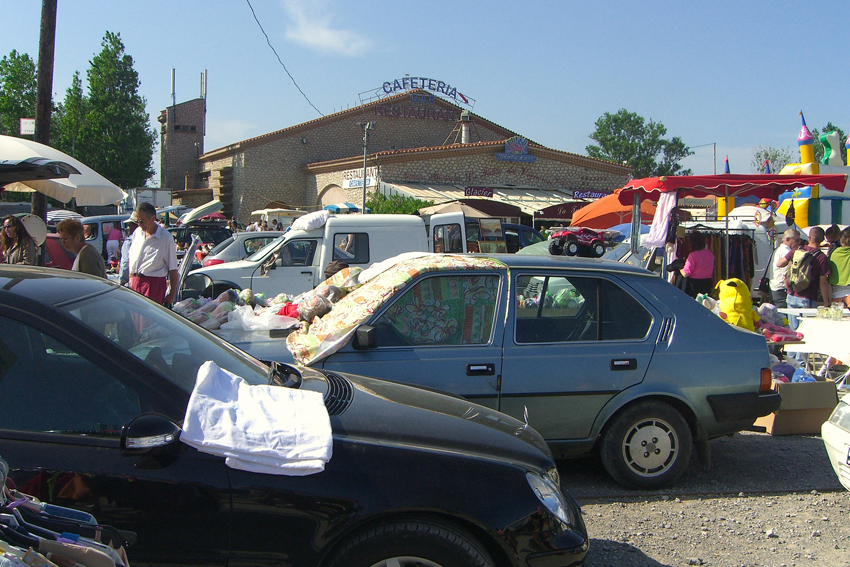